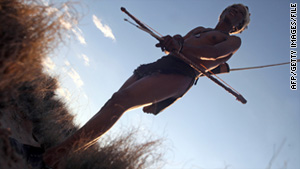 (CNN) -- A 2005 cable by the U.S. ambassador to Botswana criticized how the southern African nation's government handled the removal of Bushmen people from the Central Kalahari Game Reserve, according to the document obtained by WikiLeaks and published Thursday by London's Guardian newspaper.

The cable by former Ambassador Joseph Huggins described a visit to the government-run Bushmen settlement called New Xade outside the reserve where hundreds of Bushmen lived after being forced to leave the protected area.

"It is also clear that people have been dumped in economically absolutely unviable situations without forethought, and without follow-up support," said the cable bearing Huggins' name at the bottom. "The lack of imagination displayed on the part of the GOB (government of Botswana) is breathtaking."

The Bushmen, traditional hunter-gatherers indigenous to arid regions of southern Africa including the desert interior of Botswana, were forced out of the Central Kalahari Game Reserve by the government in 2002.

The government said human inhabitants were out of place in a wilderness reserve, but the Bushmen and their advocates argued the government was clearing the way to launch the lucrative mining for diamonds, the country's economic mainstay.

On Monday, Botswana's government granted a 25-year, $3 billion mining license to Gem Diamonds for an area that includes the part of the Central Kalahari Game Reserve, claimed as indigenous homeland by the Bushmen.

The cable, if authentic, doesn't represent the current situation, Jeff Ramsey a spokesman for the Botswana government, said in an e-mailed statement.

"It is at best a snapshot of one individual's own initial assessment at a point in time," he said.

Ramsey said the government has "engaged in a wide range of economic empowerment initiatives" for those affected by the relocation, including providing livestock, small business mentoring and other services.

"It has been and remains Government's view that the establishment of New Xade has increased both the immediate and long-term opportunities for economic and social development of its residents, as is reflected in the village's ongoing growth," he said.

In a separate but related matter, an appeals court in Botswana will rule as soon as next week on whether Bushmen who have returned to the game reserve have the right to use a water well, known as a borehole, near their settlement.

Last year, Justice Lakhvinder Singh Walia ruled against the Bushmen, saying they could choose to live closer to where water and other essential services were available outside the reserve.

At an appeals court hearing this week, the lawyer for the Bushmen told the five appellate judges that the Bushmen had a lawful and constitutional right to live in the game reserve. In addition, the lawyer, barrister Gordon Bennett, said the nation's Water Act allows any legal occupant of land to dig a borehole for domestic use.

In response, the lawyer for the government told the appellate panel that the government was not obliged to restore resources for the Bushmen in the game reserve.

The lawyer, Paul Berger, said the government provided sufficient water to Bushmen communities outside the reserve.

"The applicants have eschewed the government's provision of services in favor of living traditionally in the" game reserve, Berger said. If the Bushmen chose to live a nomadic life like their ancestors, they should do so as their ancestors did, without government-provided water, he argued.

According to Survival International, a London-based group that advocates for the Bushmen, a 2006 court ruling gave the Bushmen the right to return to their ancestral land, but the government "has done everything it can to make their return impossible," the group says on its website.