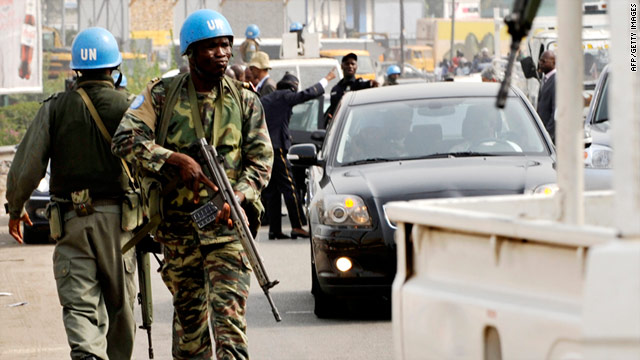 "[Wednesday], we will adopt the resolution," Ambassador Ivan Barbalic of Bosnia-Herzegovina, this month's president of the council, told reporters. Asked whether disagreements between member states led to the delay, Barbalic said "There are no disagreements. It will be adopted."

The Security Council is expected to approve the increase unanimously, a diplomat from one of the council's member states told CNN on Monday.

U.N. officials requested up to 2,000 more peacekeepers in early January, which would bring mission strength to more than 11,000 troops and police.

The increased number of troops comes amid a standoff between self-proclaimed President Laurent Gbagbo and the internationally recognized winner of November's presidential runoff, Alassane Ouattara.

Ouattara is holed up in a hotel in Abidjan under the protection of U.N. peacekeepers, and the United Nations has blamed Gbagbo's supporters for a string of attacks on U.N. vehicles and troops in the past week.

Gbagbo's foreign minister, Alcide Djedje, said earlier this month that the peacekeepers are "complicit with the rebellion" and that the sitting government has "no more confidence in the U.N."

The standoff has raised fears of a renewal of the bloodshed suffered after a civil war broke out in 2002. More than 25,000 Ivorians have fled to neighboring Liberia since the crisis began, the U.N. High Commissioner for Refugees reported last week.

The cocoa-producing nation was wracked by civil war from 2002 to 2007, when a settlement left the country divided between north and south.

The 2010 elections came with high expectations that they would open a new chapter in the country's history.

CNN's Whitney Hurst and Zain Verjee contributed to this report.