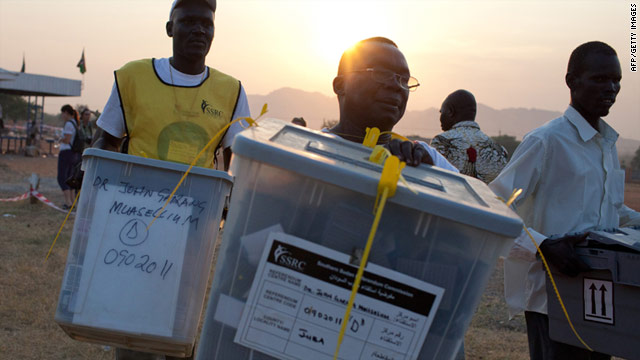 (CNN) -- President Barack Obama on Sunday congratulated those in Southern Sudan on their weeklong referendum, saying the peaceful and orderly vote "was an inspiration to the world."

Ballot counting began Saturday after the vote -- the results of which could split Sudan in two. Balloting was monitored by local and international observers. Nearly 4 million people were registered to vote in the referendum to determine whether Southern Sudan should declare independence from a government based in the north.

Thousands traveled by ferry or bus, some traveling for days just to participate in the historic referendum.

"The sight of so many Sudanese casting their votes in a peaceful and orderly fashion was an inspiration to the world and a tribute to the determination of the people and leaders of south Sudan to forge a better future," Obama said.

Southern Sudanese in the diaspora also cast ballots in the United States and seven other countries. As the final minutes ticked down to the closing of the polls Saturday evening, a local band and church choir in Juba could be heard singing, celebrating and urging last-minute voters to cast their ballots. One song included the lyrics, "Bye, bye Khartoum," the capital of Sudan located in the northern region.

Officials in Southern Sudan said preliminary results show more than 60% of registered voters had cast ballots in the independence referendum, crossing the threshold needed for it to be valid. Officials speculated that final turnout numbers could be as high as 91%.

Khalil described the process as orderly, peaceful and civilized.

"The past week has given the world renewed faith in the prospect of a peaceful, prosperous future for all of the Sudanese people -- a future that the American people long to see in Sudan," Obama said. "The referendum now moves into another phase, and while official results will not be available for some time, independent observers have been extremely encouraged by the credibility of the process to date."

Ezekiel Lol Gatkuoth, who leads Southern Sudan's mission in the United States, said, "I have not encountered a single Southern Sudanese who is interested in voting for unity. I would say at least 98% of them will vote for separation."

"This is what we have been fighting for for more than 50 years," he said.

At one polling station in Juba, 95 of the first 100 votes tallied were for secession and five were in favor of unity, according to a CNN count.

Preliminary results are expected to be announced January 31, Khalil said.

U.N. Secretary-General Ban Ki-moon commended the work of the referendum commission, his office said in a statement Saturday.

The referendum is part of a 2005 peace agreement that helped end two decades of civil war that killed about 2 million. The war pitted a government dominated by Arab Muslims in northern Sudan against black Christians and animists in the south.

About 80% of Sudan's oil reserves are in the south, another flashpoint in the war.

The conflict scarred an entire generation in remote Southern Sudan, which is the size of Texas but only has 30 miles of paved roads. Southerners -- and their ancestors -- have long felt dominated by the north.

"We have waited for 50 years, and we want to be separate," said John Baptiste, a voter.

Sudanese President Omar al-Bashir, wanted for war crimes after mass killings and rape in the country's western Darfur region, has said that a Southern vote for independence would be like "cutting off a part of the nation's body but not the end of the world."

Al-Bashir has said he will honor the results, though analysts are concerned he might not keep his word.

"We urge all parties to continue to urge calm and show restraint as the parties work to complete implementation of the 2005 Comprehensive Peace Agreement," Obama said.

The south would become a new nation in July if voters choose independence and no other obstacles emerge.

CNN's Ingrid Formanek and David McKenzie contributed to this report.