At least 19 killed in riots in Tunisia, government official says 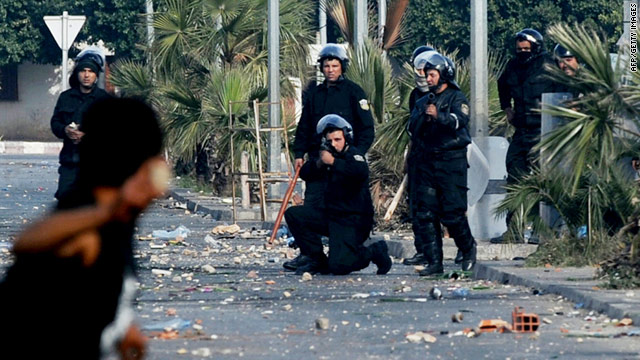 A member of the Tunisian security forces takes aim at a demonstrator on Monday in Regueb.
STORY HIGHLIGHTS
RELATED TOPICS

Tunis, Tunisia (CNN) -- Nineteen demonstrators protesting high unemployment and poor living conditions have been killed during the past two days in riots that broke out in two Tunisian cities near its border with Algeria, a government official said Monday.

The incidents occurred in the cities of Thala and Kasserine, said Minister of Information Samir Abidi. All of the dead were demonstrators; more than 30 police were injured, he said.

Amnesty International said at least 23 people died in protests over the weekend, and it had received reports of more deaths on Monday.

Citing "information gathered by Amnesty International," it said security forces fired tear gas and live ammunition to disperse demonstrators in the cities of Thala, Kasserine and Regueb in central Tunisia.

"The authorities must urgently ensure the safety of protesters and instruct security forces to act with restraint and not to use excessive force against them," said Hassiba Hadj Sahraoui, Amnesty International's Middle East and North Africa deputy director.

"The authorities claim they acted in self-defense but the rising death toll and the images of demonstrations suppressed by the security forces cast serious doubt on this version of events," Hassiba said.

The organization called for an investigation into the deaths and for those responsible to be punished.

Major cities were unaffected by the unrest.

The demonstrations included demands for the government to improve social services. Tunisia's government called the protesters violent troublemakers. Tunisia has been ruled for 23 years by President Zine el Abidine Ben Ali, an ally of Western powers and a target of activist and human rights groups that accuse him of running a corrupt police state that has infringed on citizens' rights.

In his second speech since the riots erupted, he said on national radio and television that he was ordering the creation of as many as 300,000 jobs and called for greater freedoms for members of the news media.

"These violent, sometimes bloody events, which caused deaths among civilians and injuries among security officers, were perpetrated by hooded gangs that attacked, at night, public institutions and even citizens in their houses," he said. "This is an intolerable act of terrorism."

He said he would lower taxes on employers who generate new jobs.

Tunisia's 14% unemployment rate does not reflect the true problems faced by the nation, Abidi said. The government pays for college educations, but only about a third of the 80,000 students who graduate each year from the nation's universities are able to find work, he said. As a result, he said, unemployment among college graduates hovers around 25%.

Abidi said the government does not oppose the right of demonstrators to express their opinions, but it will not tolerate violence.

Human rights groups have said the Tunisian government has cracked down on demonstrators with force. Reporters Without Borders condemned the arrests and disappearances of bloggers and online activists across a number of Tunisian cities.

The worldwide press freedom organization said police arrested the bloggers to question them about hacking into government websites.

The wave of demonstrations was sparked by the suicide of an unemployed college graduate in early December.

Mohamed Bouazizi, 26, set himself on fire in front of a government building in the town of Sidi Bouzid in early December after police confiscated his fruit cart, saying he was selling without a permit, according to Amnesty International. He died from his injuries.

In Washington, State Department spokesman P.J. Crowley confirmed that Grey was called to hear complaints about U.S. characterization of the situation in Tunis. "We again affirmed our concerns not only about the ongoing violence, the importance of respecting freedom of expression but also the importance of the availability of information, and we will continue that discussion," Crowley said. "We understand the government has a very legitimate right to ensure the safety of its citizens. That said, we do have concerns about some of the steps that the government has taken."

Amnesty International has urged the Tunisian government to respect freedom of expression.

"Tunisians must be allowed to express their grievances and freely protest," said a statement from the organization. "The authorities made empty promises of work opportunities which were followed by a crackdown on protesters."

Tunisian authorities have said they are acting in self-defense. Security forces fired on protesters in December, the state-run TAP news agency reported at the time.

At the United Nations, Secretary-General Ban Ki-moon called for restraint "and urges all parties to seek to resolve differences through dialogue," a spokesperson said in a statement.

CNN's Richard Roth and Elise Labott contributed to this story