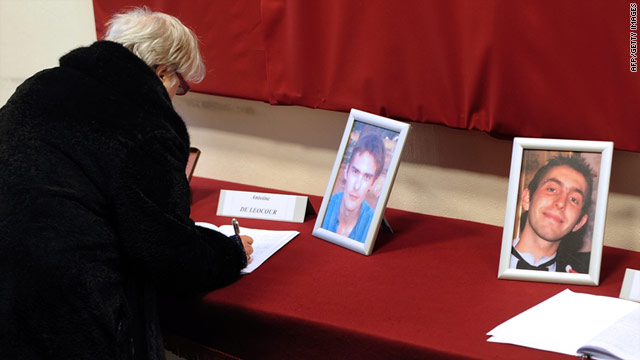 Niamey, Niger (CNN) -- Two French citizens who were kidnapped in Niger's capital were killed -- apparently executed by their abductors -- during an attempted rescue mission, the French Defense Ministry said Sunday.

"During this rescue operation, the two hostages were killed, probably executed by their kidnappers. Two French soldiers were injured and many terrorists were killed," said a statement on the ministry's website.

The two were seized by masked gunmen who burst into Le Toulousain, a restaurant owned by a French citizen, in Niamey Friday night. A witness said the bar was crowded and many people did not realize what was going on at first.

A spokesman for the Ministry of Defense said it is believed that "those behind the kidnapping were probably part of al Qaeda in the Islamic Maghreb (AQIM)." However, AQIM has not yet claimed responsibility. The group did acknowledge it was responsible for the abduction of five French citizens who have been missing since September.

No other details, including the identities of the two who were slain, were immediately available from official sources. The French newspaper Le Figaro identified the men as Antoine De Leocour and Vincent Delory, both 25.

French President Nicolas Sarkozy condemned the killings in a statement Sunday, calling them a "barbaric act."

He vowed that France will "fight relentlessly against terrorism."

Niger's Voice of Sahel radio reported severe clashes between Niger army forces and the kidnappers early Saturday near the town of Ouallam, about 100 kilometers (62 miles) northwest of Niamey, the capital, and not far from the Mali border.

The leader of al Qaeda in the Islamic Maghreb, Abu Musab Abdul-Wadud, has warned France that if it does not withdraw its troops from Afghanistan, more French nationals would be endangered.

"If you want safety for your citizens who are held captive by us, then you must move quickly to take your soldiers out of Afghanistan according to a specific time table that you announce officially," Abdul-Wadud said.

The five French citizens kidnapped in September were linked to French nuclear energy company Areva, which has been mining uranium for decades in Niger, one of the poorest countries in the world.

France has already said it may begin to withdraw some troops from Afghanistan next year. Minister Herve Morin told French radio station RTL in late October that France will begin to transfer the control of certain districts to Afghans in 2011.