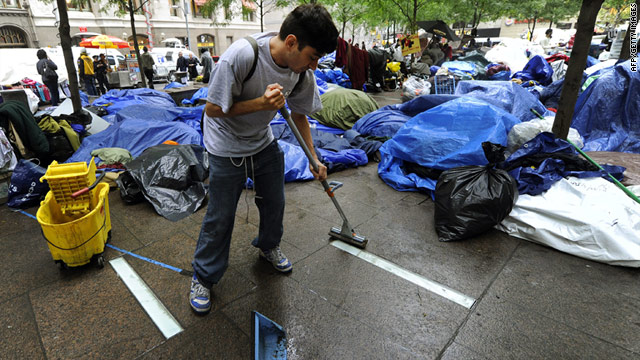 An Occupy Wall Street participant on Thursday helps clean the New York park where protesters have been camping out.
STORY HIGHLIGHTS

New York (CNN) -- Protesters will resist any efforts to remove them from the Lower Manhattan park where they have been camped for nearly a month, despite Mayor Michael Bloomberg's order that they vacate the park at 7 a.m. Friday so it can be cleaned, an organizer said Thursday.

"Come tomorrow morning, we will passively resist and make it as difficult a process to remove us as possible," said Occupy Wall Street spokesman Tyler Combelic. "It's not an occupation if you can't occupy the park."

His words appeared to be backed up by the sentiment of the crowd of more than 1,000 protesters who filled Zuccotti Park Thursday night. "All day! All week! Occupy Wall Street!" they chanted.

Combelic called the mayor's announcement a "not-so-veiled attempt" to force protesters from the park, setting up a possible confrontation with authorities.

Protesters descended on the privately owned park near the New York Stock Exchange on September 17 to protest the nation's ailing economy.

"You want to clean up something? Clean up these crooks on Wall Street," said City Council Member Charles Barron.

Daniel Mintz of MoveOn.Org said he was planning to deliver to Bloomberg more than 350,000 petitions and signatures he received Thursday from supporters around the nation. "The mayor would do a lot better cleaning up Wall Street than cleaning up the plaza," he said.

"The park is clean," said Letitia James, a councilwoman from Brooklyn. "The issue of cleanliness is a ruse, a disguise and nothing more than an excuse to end OWS." Some protesters could be seen sweeping up debris. Others said they have used donated funds to clean the park.

A number of unions have pledged to support demonstrations cropping up in cities nationwide.

Maida Rosenstein, president of UAW local 2110, said members of her chapter planned to gather at the park at 7 a.m., when the cleaning is scheduled to begin.

"If the mayor thinks he's going to evict these protesters and end these protests, he needs to know that New Yorkers are watching," Rosenstein said. "The unions are going to be there tomorrow and are also watching."

Bloomberg met Wednesday with protesters and told them that the decision to clean the park was made after owners voiced concerns about "unsanitary conditions and considerable wear and tear on the park."

"The mayor is a strong believer in the First Amendment and believes that the protesters have a right to continue to protest," Deputy Mayor for Operations Cas Holloway said in a written statement. But the situation in the park is "not in the best interests of the protesters, residents or the city," he said.

The cleaning is to be done in stages, and protesters will be allowed to return to the park as areas are cleaned if they obey the rules set forth by the owners, Brookfield Properties, the statement said.

"The park has not been cleaned in four weeks, a process that is normally undertaken every night," Brookfield said Thursday in a statement. "Our goal is to keep the park clean, safe, and accessible to all."

A walk in the park Thursday night found it in orderly shape. The only distinctive smell was an occasional waft of marijuana smoke. Loads of cardboard boxes holding clothes and other personal belongings were neatly tied up in one area; garbage bags were piled in garbage-collection areas; a number of people were cleaning up.

Authorities have distributed a pamphlet at the park outlining a list of rules for protesters after the scheduled cleanup.

The rules prohibit camping or pitching tents; lying on the ground or on benches; placing tarps or sleeping bags on the ground; using bicycles, skateboards or skates; and storing personal property that interferes with park use.

Zuccotti Park was built for the general public, but the weeks-long protest has raised concerns among area business owners and residents about sanitation.

The protest campaign began in July with the launch of a campaign website calling for a march and a sit-in at the New York Stock Exchange.

For almost a month, demonstrations have addressed such issues as police brutality, union busting and the economy, the group said.

Organizers have taken inspiration from this year's Arab Spring protests that swept through North Africa and the Middle East. Crowds have taken up residence in the park in New York's financial district, and organizers have called for 20,000 people to flood the area for a "few months."