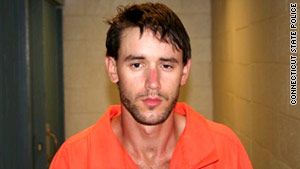 Joshua Komisarjevsky's was convicted Thursday for his involvement in the 2007 home invastion killings.
STORY HIGHLIGHTS

New Haven, Connecticut (CNN) -- Joshua Komisarjevsky, the second man to be tried in connection with a deadly 2007 Connecticut home invasion, was found guilty on all counts during the second day of deliberations Thursday in a case that drew worldwide attention and sparked broader discussions about safety in the home.

Komisarjevsky was convicted of 17 charges, including three counts of murder, four counts of kidnapping, and charges of burglary, arson and assault.

He could receive the death penalty.

On Tuesday, the jurors heard lawyers' final pleas in the case as prosecutors cast Komisarjevsky, 31, as the instigator of the attack, while the defense insisted "he did not want anyone to die."

The trial has gone on for a little over three weeks, during which time jurors heard emotional testimony detailing the deaths of Jennifer Hawke-Petit and her daughters -- 17-year-old Hayley Petit and 11-year-old Michaela Petit.

Steven Hayes, the first defendant to stand trial, was sentenced to death in December 2010 after a jury convicted him on 16 of 17 charges.

Prosecutors had argued that Hayes and Komisarjevsky went into the Petit home, beat and tied up Dr. William Petit, raped and strangled his wife, molested one of their daughters, and set the house on fire before attempting to flee.

The two daughters, who were both tied to their beds, died of smoke inhalation, though William Petit managed to escape.

Before assaulting and killing Hawke-Petit, Hayes forced her to go to a bank and withdraw $15,000 from an account after finding evidence the account held between $20,000 and $30,000, authorities said.

As the verdict was read, the victims' family members wept openly.

"I personally felt this case was a case about sexual predation," he said. "There is just a huge plague of violence against women in this country."

He added that he wondered what it would have been like "if I had two sons, instead of two daughters."

Standing sullen-faced before reporters in front of a New Haven courthouse, Petit said there are only "occasional moments of peace."

"It's not clear to me that time heals all wounds ... but you form some scars."

Petit also reminded reporters that the case had not reached its conclusion. "We still have the penalty phase to go through," he said.

The sentencing phase of the trial is set for 10 a.m. October 24.