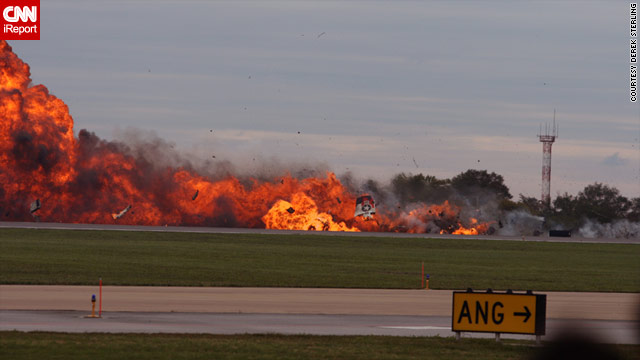 A plane crashes at a West Virginia air show, killing the pilot, but it did not injure anyone on the ground.
STORY HIGHLIGHTS

No one on the ground was injured.

It was not immediately clear what caused the accident at the 2011 Thunder Over the Blue Ridge Open House & Air Show in Martinsburg, West Virginia. The pilot was flying a T-28 aircraft.

"We saw a flash of light ... and heard the explosion sound," she told CNN's Don Lemon. "It was scary."

"You just heard the whole crowd gasp simultaneously and everybody just kind of went silent and was just watching what was going on," she said.

The West Virginia crash came one day after another deadly air crash.

A pilot lost control of his vintage plane during an air race in Reno, Nevada, on Friday, plummeting toward thousands of spectators before narrowly missing a grandstand and slamming into box seats. Nine people, including the pilot, died in that accident, according to local police.