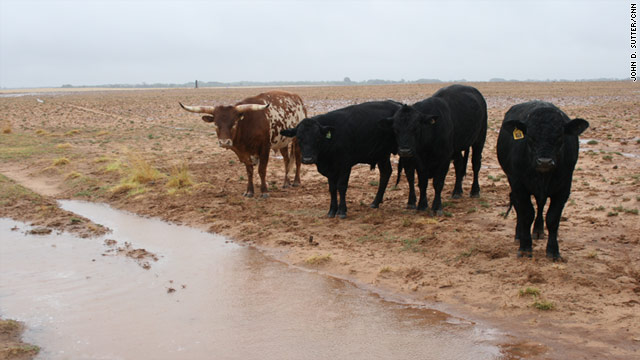 Cows in the Texas Panhandle seem just as perplexed as their owners when rain fell Thursday.
STORY HIGHLIGHTS

Memphis, Texas (CNN) -- John Hall, a rancher in the drought-stricken Texas Panhandle, got an unexpected call from his 81-year-old mother on Thursday morning:

"What's that stuff falling from the sky?" she said.

"You forget what it was?"

"It," of course, is rain -- and it's the only thing that's been on anyone's mind or lips since it started slowly and miraculously falling on this dusty stretch of board-flat country early Thursday.

At about three-quarters of an inch, it's the most significant rain this part of Texas -- east of New Mexico and west of Oklahoma -- has seen in months.

"I swear to goodness, it's like manna from heaven. I was about to go stand out there without any clothes on in it," said Debbie Wiles, the owner of a breakfast restaurant who, like any God-fearing Texan, decided against acting on this impulse.

For locals, rain is a more-than-welcomed respite from the other line of conversation that's been swirling around this place for a year: drought. Texas had the hottest summer in its history this year, according to the National Oceanic and Atmospheric Administration. You've probably noticed as much in the headlines: Wildfires have been ripping through central Texas, near Austin, destroying more than 1,500 homes; and places such as Wichita Falls, which recently hit its 100th day of 100-degree temperatures this year, have been setting high-temperature records.

Nearly all of the state is classified as being in an "exceptional" or "extreme" drought by the U.S. Drought Monitor. "Texas conditions continue to deteriorate what little they can from abysmal," that group said in an update this week.

Farmers and ranchers in the Panhandle have been quietly suffering -- selling off cattle that have no grass to eat and giving up on crops that never sprouted. Entire fields are brown and barren -- "not a weed on 'em," as one farmer put it.

Old-timers and climatologists say this drought is more intense than the 1930s Dust Bowl when enormous walls of dust scraped through the Great Plains, filling people's lungs and homes with powdery bits of earth.

During the Dust Bowl, annual rainfall ranged from 12 to 20 inches. Amarillo has seen only 3.89 inches of rain this year. Last year, for comparison, the area got 27 inches.

"It's scratching the surface," Andrew Moulton, a meteorologist at the National Weather Center in Amarillo, said of the recent rainfall's impact on the drought. "If we can get rain like this once a week for a few months, things would start to improve."

For now, Panhandle residents will take what they can get.

Many of them woke up to the sweet smell of moisture in the air.

"It just fell last night, nice and slow. It didn't even wake me up," said Tommie Saye, who has been collecting backyard precipitation measurements for 60 years -- and who hasn't had much to write down as of late.

"Shoot -- don't a drop of rain fall on my home and I don't hear it," his friend, Don Robinson, a rancher and farmer, quipped back.

Thursday's weather floated in as more of a spitting mist than anything. It coated the pre-dawn ground, making paved roads glitter beneath orange-tinted street lamps.

As the rain picked up, Hall, the rancher, had to use his windshield wipers on his truck to see the road. The dash on his vehicle is still coated in a fine dust from drier days.

Hall had planned Thursday to help a neighbor round up a herd of cattle for sale because there's not enough grass for the animals to eat. Some of the grass that is left is so short that cows would need long and healthy teeth to be able to chew it, he said.

So cows with worn-down teeth are the first to be sold.

But that selection process would have to wait for better weather.

The ranchers took a rain delay.

Hall already has sold about half of his own herd, and he expects to sell more. One of his calves died earlier this year from pneumonia, which he thinks the calf contracted by breathing in too much dust from the bone-dry air.

Even with the landscape looking cleaner and damper, visual reminders of the drought were still everywhere. At Greenbelt Lake, north of Clarendon, for example, a boat ramp leads to a wet field of grass; a pontoon boat sits on the side of a hill; a boat barn is beached on land as well, a few hundred feet from the shore.

Forecasters don't expect the drought to lift any time soon.

NOAA's drought monitor predicts drought conditions in Texas will "persist or intensify" between now and December.

Climate scientists, meanwhile, say the extreme heat seen this summer in Texas could become more of a norm. Droughts may also become more intense as the atmosphere warms.

"As temperatures continue to rise, these droughts will become hotter," said John Nielsen-Gammon, the Texas state climatologist, "and what would have been an adequate amount of precipitation in the past might not be quite as adequate in the future."

Panhandle residents have lots of theories about why the weather has been so extreme this year -- or why the rain came Thursday.

Most of them have nothing to do with forecasts or science.

Those are liable to let you down, they said. The weather out here is just too unpredictable, and Panhandle residents have seen it all.

Hall turns to religion for his source of explanation.

Perhaps God is punishing people with the bad weather, he said, and if more people turned to the church, the rain would come back to stay for a while.

Saye chalks it up to chance.

For decades, he's been making daily recordings of the temperature and rainfall in his backyard, and phoning those in to the National Weather Service.

"This has been the craziest year I've ever seen," he said.

But he doesn't pretend to know why that's the case -- or what will come next.

"Oh hell, I just write down what happened -- I don't make predictions," he said. "The good Lord is the one that does the predicting and he sends (rain) when he wants to."