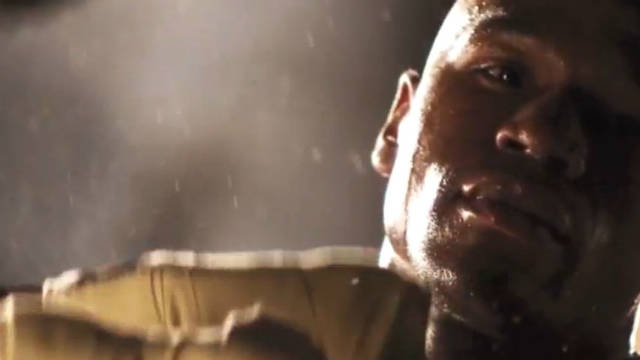 Inside the life of Floyd Mayweather
STORY HIGHLIGHTS

Watch the final episodes of the "24/7" documentary featuring Floyd Mayweather Jr. and Victor Ortiz tonight on CNN at midnight ET

(CNN) -- Boxer Floyd Mayweather Jr. doesn't mind if people hate him. He's going to be who he is, not ashamed of his wealth of talent and cash. He will readily remind you of both.

Mayweather's nickname, "Money," is more than a moniker; it's his lifestyle.

He lives in a 22,000-square-foot Las Vegas mansion. He drives custom Rolls Royces and Maybachs. He hangs out with celebrities like 50 Cent. He once flaunted his fortune by burning a $100 bill in a nightclub.

He's made a (bad) name for himself, with a reason.

"He showed up on the scene not as a big puncher, not as a knockout artist, not as a guy who is going to excite fans that way but as a great pure boxer who felt he was being underappreciated," said Max Kellerman, an HBO boxing analyst and CNN contributor. "And the louder he started to talk, the more attention he would get."

Kellerman compared it to being cast in an action movie.

The bad guy persona has been helped by troubles outside the ring. He has feuded with his father, most recently on the HBO documentary series 24/7, where the two almost came to blows during a break in a training session. Junior and Senior crassly insulted each other, and the younger Mayweather denigrated his father as a trainer (his uncle Roger has held that position -- except during a suspension -- since Junior fired Senior) and then demanded that the eldest Mayweather get the "F" out of the gym.

After he was isolated in a dressing room, Money continued to rant.

Inside the life of Floyd Mayweather

Victor Ortiz shows off his best

Mayweather vs. Ortiz: Fighters face off

"Roger Mayweather made the Mayweather name (as a two-time world champion) ... and I took it to the next level. And when it's all said and done, there are only two (bleepin') Mayweathers that count: Roger Mayweather and Floyd Mayweather. And (motherbleeper), I'm not no junior," Junior says at the end of the five-minute argument and tirade.

The problems don't end with family squabbles. Mayweather is also the defendant in six court cases, HBO reported (HBO, like CNN, is owned by Time Warner). The boxer says that he's innocent and that people are just trying to cash in and get money from a rich target.

One of the people suing him is Manny Pacquiao, widely considered the best fighter of any size.

The boxing public wants -- demands -- that the two fight before they get too old and their marvelous skills erode. But Mayweather wants 33-year-old Pacquiao to take a Olympic-style random drug test, which Mayweather says he does before every fight. The two camps have failed to reach agreement on how close to a fight date the testing would take place.

But as Kellerman and others point out, the likely result will come after some struggle. Ortiz is a bigger fighter and a hard puncher who, unlike most boxers, leads with his right hand.

Ortiz: 'Fear doesn't even exist in my vocabulary'

Also, Mayweather hasn't fought in more than a year. Thirty-four might not be old to many people, but to a boxer that age, the sun is shrinking over the horizon.

"I still feel strong when I get to the gym," Mayweather said last week in a teleconference to promote the fight. "I still think I'm very, very sharp ... and I think the reason why is, I don't think that I have been in any toe-to-toe wars."

And that's the genius of Mayweather, Kellerman said. He is so hard to hit; he's the best defensive fighter of this era. He makes opponents swing without reward and then punches them before they have a chance to cover up.

Where you will see a change in Mayweather's style, Kellerman said, will be in the way he moves in the ring. Older legs get tired faster, and Mayweather chose to stand more in front of his opponents in his most recent fights.

"It's more fan-friendly," Kellerman said. "And it's slightly riskier."

De La Hoya fought past his prime and knows about a lot about being old at 34. He was that age when he fought Mayweather and lost a decision.

He recently told Ortiz, "I was spent" by the time that fight happened.

The fighter's body starts to shut down at some point, a former world champ told the Los Angeles Times

"We change mentally, emotionally, physically," ex-lightweight No. 1 Ray Mancini told writer Lance Pugmire. "The piss-and-vinegar attitude goes away. The reflexes aren't the same. In training camp, you do seven reps instead of 10 and think, 'Don't worry about it.' But you're not pushing yourself the same, and you pay for it."

Mayweather insists that hasn't happened to him and that he still trains harder than other fighter. In fact, he boasts that he trains harder than any other athlete, period. It keeps him near his fighting weight even during long stints of no competitive boxing.

He said that while other people in the 147-pound division will get as heavy as 160, he's never more than a few pounds away from the weight requirement for his division.

Not that he religiously watches what he eats. If he gives his chef a night off and wants to go eat pizza with his daughter, he does so. He doesn't worry about it affecting how he fights.

"My skills are still my skills," he said.

And those skills are immense, Kellerman said. He ranks Mayweather as one of the three best pure boxers since World War II.

Few champions have retired undefeated. As he nears the finish line of his career, Mayweather has just a few hurdles to jump. He is extremely confident that he won't stumble. The question is, are all the distractions -- the insane fame, the wealth, the family fights, the legal hurdles, the months outside the ring, his senior status -- too much?

On Saturday night, his fans and his many detractors will find out the answer.