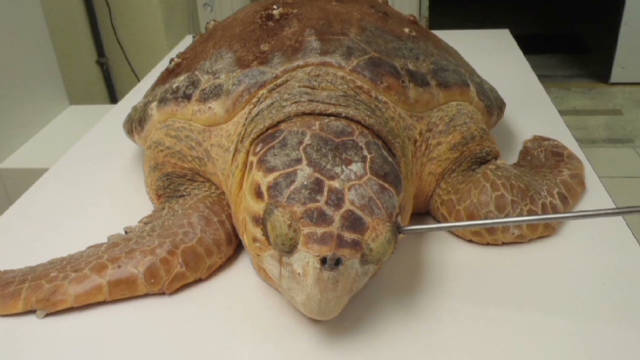 (CNN) -- She was named Sara, after the daughter of the man who found her, and she got to go home Wednesday.

For her, home is the waters of the Florida Keys, a place no one expected she'd ever return to. Sara is a 115-pound federally protected loggerhead sea turtle who, if not for sheer luck, would be dead today.

In early August, a father and son fishing in the Keys spotted Sara floating with a 4-foot spear sticking out of her head. The loggerhead was taken to the Florida Keys Turtle Hospital.

"This has to be one of the luckiest turtles in history," said veterinarian Doug Mader.

The odds of saving Sara were not good. The spear had gone in just behind her ear and lodged against the jawbone on the other side.

"Quarter of an inch in either direction," said Mader, "and the animal would be dead."

The shooting of the turtle had to be deliberate, said Rich Moretti, who runs the Turtle Hospital in Marathon. From the angle of entry it appeared to the medical team that Sara had been shot from above, probably from a boat.

"Everyone in the Keys was absolutely offended that someone would come down and do that to one of our turtles," Moretti said. He said he does not believe whoever shot the turtle was from the Keys. The spear was much bigger than what locals would normally use, he noted.

The day after the turtle was rescued, Moretti took a picture of the spear to every dive shop in the area. He hoped the person who shot the turtle would come looking for a replacement and someone in that shop could make an identification. No luck.

Doctors who first looked at the injured turtle said that with each breath she took, they could hear a fluttering sound. After stabilizing Sara and giving her antibiotics, Mader was able to remove the spear from her head and the flutter ended.

Sara is a young turtle, about 12 years old. It was only a week ago she started eating on her own, gobbling up some squid. Once that happened, Moretti said, "we knew it was time for her to go back home."

A $16,000 reward is offered for tips that lead to the arrest and conviction of those responsible for the injury. Much of the money came from local commercial fishermen and boat captains. The National Oceanic and Atmospheric Administration's Marine Fisheries Service is investigating.

The staff at the Turtle Hospital sees many accidental injuries, "animals tied up in fishing line or hit by a boat," Moretti said. "When we see something like this, intentional, it's rare."

It's even rarer for a turtle to survive and recover so quickly from the kind of damage Sara suffered.

Under a beautiful blue September morning sky, Sara was released near the Seven Mile Bridge in Marathon. For the volunteers, the doctors, and Moretti, this was the kind of day that makes them smile.