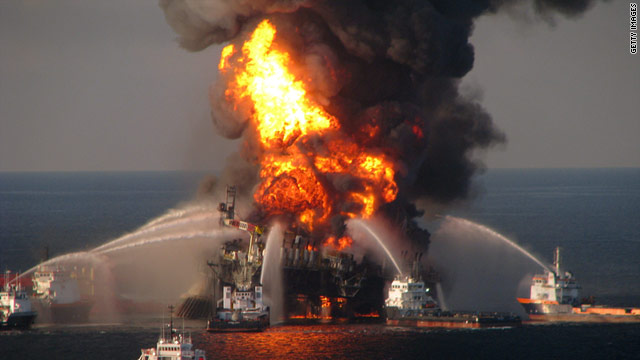 Washington (CNN) -- BP, Transocean and Halliburton all share responsibility for the deadly explosion that resulted in the April 2010 Gulf of Mexico oil spill, according to the final federal report on the matter released Wednesday.

The three companies "violated a number of federal offshore safety regulations," according to the report, which includes a series of recommendations for improving drilling safety.

The report, issued by the Bureau of Ocean Energy Management, Regulation and Enforcement, concludes that a key cause of the explosion was a faulty cement drilling barrier at the Macondo well site.

"The precise reasons for the failure of the production casing cement job are not known," the report states. But the disaster was "the result of poor risk management, last minute changes to plans, failure to observe and respond to critical indicators, inadequate well control response, and insufficient emergency bridge response training by companies and individuals responsible for drilling" at the site.

BP was "ultimately responsible" for operations at the site "in a way that ensured the safety and protection of personnel, equipment, natural resources, and the environment," the report concludes.

But Transocean, the owner of the Deepwater Horizon rig, was also "responsible for conducting safe operations and for protecting personnel onboard."

Meanwhile, Halliburton -- a BP contractor -- was "responsible for conducting the cement job, and ... had certain responsibilities for monitoring the well," the report says.

A spokesman for BP said the company agrees with report's conclusion.

"The Deepwater Horizon accident was the result of multiple causes, involving multiple parties, including Transocean and Halliburton," Scott Dean said. "BP (has) acknowledged its role in the accident and has taken concrete steps to further enhance safety. ... We continue to encourage other parties to acknowledge their roles in the accident and make changes to help prevent similar accidents in the future."

Lou Colasuonno, a Transocean spokesman, said the report "confirms that the primary cause of the incident was the catastrophic failure of the cement in the Macondo well," but his company continues to take "strong exception to (any) criticisms of the Horizon drill crew."

Halliburton continued to deny any responsibility for the tragedy.

The report "incorrectly attributes the operation decisions to Halliburton," said Zelma Branch, a Halliburton spokeswoman. "Every contributing cause where Halliburton is named, the operational responsibility lies solely with BP. Halliburton remains confident that all the work we performed with respect to the Macondo well was completed in accordance with BP's specifications for its well construction plan and instructions."

The explosion on the rig led to more than 200 million gallons of oil being released into the Gulf. Eleven people working on the rig died in the explosion, while 16 others were injured.

Besides the oil, hundreds of thousands of gallons of chemical dispersant went into the water. At the peak of the crisis, in June 2010, 37% of Gulf waters -- a total of 88,522 square miles -- were closed to fishing due to contamination.

The U.S. government announced plans in August to hold its first oil and natural gas lease sale in the Gulf since the incident.

The proposed sale, scheduled for mid-December in New Orleans, will include more than 20 million acres in the western Gulf, according a recent statement from the Department of the Interior.

CNN's Vivian Kuo and Alan Silverleib contributed to this report