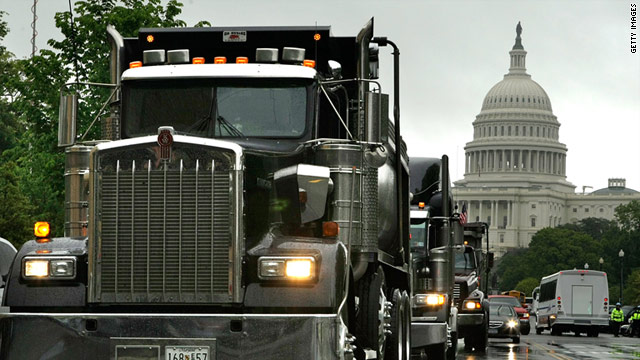 The National Transportation Safety Board is recommending a ban of cell phone use by truckers while driving on the job.
STORY HIGHLIGHTS
RELATED TOPICS

Washington (CNN) -- In an action that could affect millions of truckers, the National Transportation Safety Board on Tuesday recommended that commercial drivers be prohibited from using both hand-held and hands-free mobile phones while driving on the job.

The recommendation is the most far-reaching yet by the safety board, which has previously recommended that young drivers and bus drivers be prohibited from using cell phones while at the wheel. The new recommendation calls for a ban on all cell phone use by people holding commercial driver's licenses while operating their vehicles, except in emergencies.

While the recommendation does not carry the weight of law, the safety board's actions often are a catalyst for local, state and federal legislation.

The board made the recommendation Tuesday after concluding that a 45-year-old truck driver, responsible for a fatal crash near Munfordville, Kentucky, that killed him and 10 others last year, was likely distracted by his cell phone at the time of the crash.

Investigators determined the driver used his mobile phone for calls and text messages 69 times while driving in the 24 hours before the accident. The driver made four calls in the minutes leading up to the crash, making the last call at 5:14 a.m., coinciding with the time the truck left the highway, the board said.

The tractor-trailer left the southbound lanes of Interstate 65, crossed a 60-foot-wide median and went over a cable barrier system before entering the northbound lanes and striking a van occupied by 12 people. The trucker, the van driver and nine van passengers were killed.

Two children who survived the accident were saved by their child restraint systems, the board said.

Investigators said there was no evidence that mechanical problems, weather, road conditions or driver health problems were factors in the crash, which was called the worst in a generation in Kentucky. The probable cause, they said, was that the driver was distracted by his cell phone.

The driver was known to have a "hands-free" technology, but it was unclear whether he was using his phone in a hands-free mode at the time of the accident, the NTSB said.

They added that the truck driver was fatigued at the time of the accident, which may have contributed to the distraction effects of the phone.

Safety board Chairman Deborah Hersman said a cell phone ban could save lives on highways.

"Changing behavior can start right now, for drivers of big rigs, but also for the rest of us," Hersman said. "When you are at the wheel, driving safely should be your only focus."

The board said both hand-held and hands-free cell phones cause distractions, and both should be banned for commercial drivers.

This would include the many thousands of box trucks that don't leave the state.

"Texting is even more dangerous than drunk driving, and we have consistently supported bans," he said.

But, he said, safety studies show that hands-free devices do little to make driving less dangerous. "There are almost no safety effects."

Stephenson said most trucking companies already set limits on the use of phones. "It is almost uniform among the trucking industry that texting and hand-held phones are banned by company policy," he said.

The NTSB also said the cable barrier system in the median, which had recently been installed after another cross-median fatal accident on the same section of I-65, contributed to the severity of the accident because it was not designed to redirect or contain a vehicle of the truck's size.

The board made recommendations regarding the use of appropriately designed median barriers on roadways with high volumes of commercial vehicles.