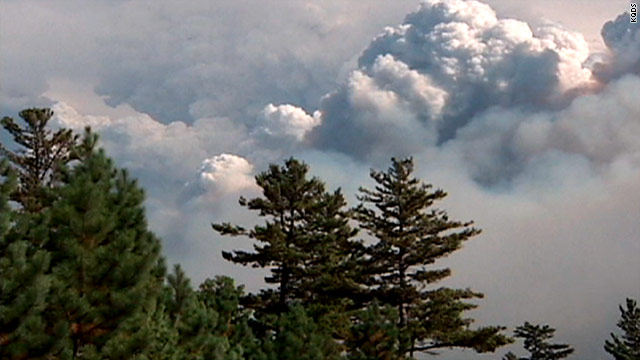 (CNN) -- A wildfire in a northeast Minnesota woodland grew by nearly tenfold Tuesday, giving off a pall of smoke that stretched from the Canadian border to southern Wisconsin.

Minnesota Gov. Mark Dayton called in National Guard helicopters to assist firefighters as the Pagami Creek fire, located in the remote Superior National Forest. It spread from about 11,000 acres on Monday to more than 100,000 by Tuesday afternoon, said Doug Anderson, a spokesman for the firefighting effort.

The blaze started in mid-August after a lightning strike, but jumped about 16 miles eastward on Monday -- "unprecedented for northern Minnesota," said Lisa Radosevich-Craig, another spokeswoman for the fire command.

No injuries were reported and no buildings had been destroyed, but 36 homes in the nearby community of Isabella were evacuated as a precaution, she said.

The fire was centered about 80 miles north of Duluth and about 240 miles north of Minneapolis -- but the smoke stretched across the upper Great Lakes for hundreds of miles. Tyler Barnes, a spokesman for baseball's Milwaukee Brewers, said that haze contributed to the team's decision to close the retractable roof at its stadium for Tuesday night's game against the Colorado Rockies.

"The forecast tonight was for lower temperatures that would have put us right around the line for closing the roof for fan comfort," Barnes told CNN. "The haze and smoke made the decision that much easier."

Milwaukee is about 500 miles from the blaze.

Radosevich-Craig said the fire was spread by near-drought conditions in the region that had already prompted the Forest Service to close some parts of the reserve and restrict campfires in others. The last major fire in the area, about five years ago, scorched about 35,000 acres, she said.