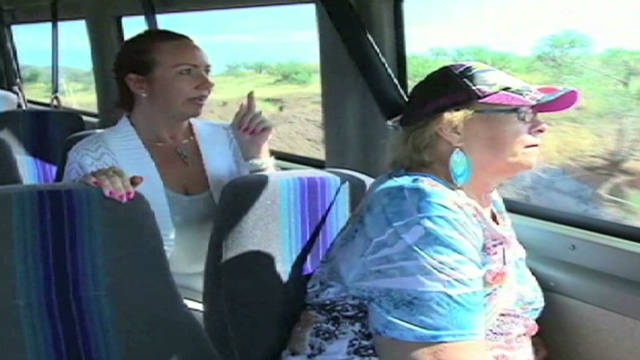 (CNN) -- On a recent sunny Arizona morning, Judy Macintyre, a 72-year-old tourist from Minnesota, is ready to board a bus. But this is not just any tour. To Macintyre, it's an opportunity to take an in-depth look at a controversial issue she wanted to explore for a long time.

The tour titled "Border Crisis: Fact and Fiction" is intended to allow tourists to see immigration at one of the hottest spots on the border. And that's exactly what the adventurous Minnesotan wants to do.

"It's such a complicated issue, and there's so many sides to it, and people need to come together, work together instead of fighting against each other like they all seem to be doing right now," says the retired professor who used to teach at the University of Minnesota business school.

Experiencing the realities of the U.S.-Mexico border up close is as simple as buying an $89 ticket. The Tucson, Arizona, office of Gray Line Tours is offering the trip twice a month.

The tour operator bills the trip as "a fact-finding mission" that allows tourists to draw their own conclusions. "Don't let the politicians and news broadcasters become your only source of information," the tour description says on the Gray Line Tours' website.

Tourists are taken to the border fence. They take a look at a pedestrian bridge connecting the two countries. They see Customs and Border Protection agents in action at a crossing point, although they can't get too close for security reasons. And then they go to the areas where more than a hundred immigrants die each year. Since last October, more than 130 migrants have died while trying to cross the Arizona desert, according to the U.S. Border Patrol.

At one stop, they take a look at a water station for migrants crossing the desert. The tank was installed by Humane Borders, a human rights group. Tour operator Bob Feinman shows the blue, 65-gallon plastic tank filled with water to the tourists. He explains that for some people the tank is the difference between life and death.

"It's a hundred-and-something degrees out here. You're dying of thirst. That's what this is for, with or without a map, whether you found it on purpose or whether you stumbled across it," Feinman says.

Near the town of Arivaca, Arizona, tourists are also taken for a walk in the unforgiving Arizona desert.

Sherlee Terres, a tourist taking the trip, says the desert walk gave her a good idea about what migrants experience.

"I wouldn't make it three miles. It just seems so desolate. I'm not from Arizona originally. I was just looking at the branches with the thorns and thought, 'wow, what would happen if you were trying to get through, a thorn would just tear your clothes and your skin,'" Terres says.

The tour also includes a get-together with ranchers who want a more secure U.S.-Mexico border and who are deeply concerned about drug traffickers and smugglers.

Dan Bell, one of the ranchers who takes time to speak with the tourists, is concerned about border security and the impact of illegal migration to his property.

Tourists also hear from those who advocate easier access of products and migrant labor to the United States. Christopher Ciruli, former chairman of the Fresh Produce Association of the Americas, says that trade between the two countries is very important for communities on both sides of the border.

In the end, tourists are left to draw their own conclusions. The tour company claims the trip is intended to be apolitical and aims to educate and alert people to the realities of living on the border and the issues of life and death that play out every day in that part of the country.

The tour started in April. According to Gray Line Tours, about 100 tourists have traveled to the U.S.-Mexico border so far, but interest is increasing as the weather cools down in the Arizona desert.

The tour starts at 8:30 am and lasts eight hours. At the end of the trip, Judy Macintyre, the retired professor, says it's an eye-opening experience. "I think every congressperson should take this tour and take the information that we got."