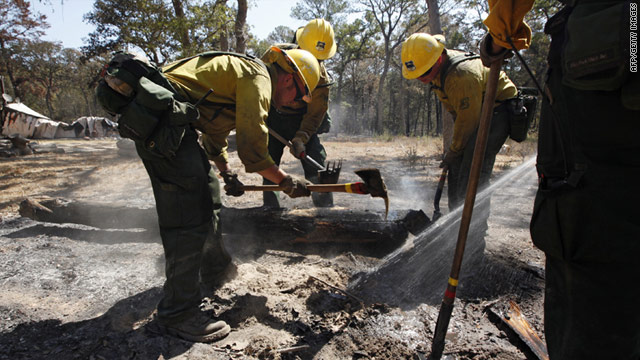 A firefighting crew from California clean up hot spots over the weekend in Bastrop, Texas, after the devastating wildfire.
STORY HIGHLIGHTS

"Our goal is to get everybody back in by Thursday," said county Judge Ronnie McDonald.

Many of the residents will return to charred homes and possessions. Those with standing homes may have to wait weeks for electricity to return, and crews are still working on restoring drinking water, utility officials said.

The Bastrop County Complex fire near Austin was 60 percent contained Monday after burning across more than 34,000 acres, according to the Texas Forest Service.

The fire is blamed for the deaths of two people whose bodies were found in the burned-out rubble of a neighborhood last week.

An urban search-and-rescue team scouring the fire zone for victims was expected to complete its work Monday afternoon, Bastrop County Sheriff Terry Pickering said. Two people among residents of the fire zone remain missing, but authorities believe they are likely out of state, Pickering said.

Some residents of the Tahitian Village East subdivision were allowed to return Sunday, as were residents with property affected by the Union Chapel fire, also in Bastrop County.

Residents in neighborhoods northeast of the town of Bastrop were being allowed to return on Monday, with additional areas reopening through Thursday.

Authorities have distributed vehicle placards for residents seeking entry into the fire zone, and so far the re-entry process has gone smoothly, Pickering said. A traffic backup early Monday had since cleared, he said.

School also resumed Monday for residents of Bastrop County, as well as in Waller and Montgomery counties, where the Riley Road fire has burned thousands of acres.

"It's a relief actually. I've been cooped up at the house and can't really do anything," student Keeley Merrill told CNN affiliate KPRC-TV.

With much of the state in an extreme drought, Texas has been scarred by one of the worst fire seasons in memory.

Since January 1, nearly 3.7 million of the state's 167.5 million acres have burned in 19,896 fires, according to Inciweb, a fire-tracking website run by state and federal agencies.

The state said the 40,548-acre Bear Creek fire in Cass County was 80 percent contained. It has destroyed 28 homes.

The Riley Road fire was reported as 75 percent contained on Monday. The fire has destroyed 59 homes, the Texas Forest Service reported.

Authorities were on the lookout Monday for possibly three monkeys that may have been released or escaped during the fire.

One of the monkeys bit a state game warden on the thumb on Sunday, said Mike Cox, a spokesman for the Texas Parks and Wildlife Department.

The bite wasn't serious, but authorities are still keeping an eye out for the monkey gang, Cox said.

While some residents expressed concern about hungry primates roaming the charred ruins, the incident gave others in battered Texas a much needed bit of comic relief.

"Has anyone noticed if the monkeys have wings?" a poster to the Grimes County Facebook page asked in jest, referring to the villainous hench-monkeys for the Wicked Witch of the West in the "The Wizard of Oz."

"If I see flying monkeys then I know I can click the heels on my red ruby encrusted flip flops and this nightmare will all go away," the poster said.

Authorities said although the monkeys -- which appeared to be of the rhesus species -- had been seen in the area, they did not know where the monkeys came from.