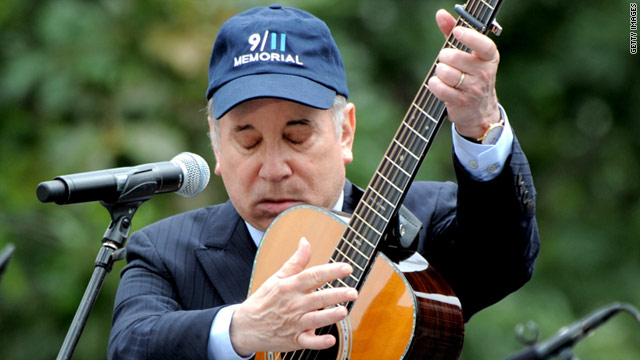 A somber Paul Simon, wearing a 9/11 Memorial cap, performed "The Sound of Silence," a change from "Bridge Over Troubled Water" listed on the program.

People in the crowd cried, embraced or sang along. Others milled around the water memorials at the World Trade Center's towers. Many did paper rubbings of victims' names or left flowers.

Sixty bagpipers and drummers led a processional at the beginning of the ceremony. The Brooklyn Youth Chorus sang "The Nation Anthem" and cellist Yo-Yo performed a Bach selection.

In America, thoughts turn to 10 years ago

As is customary, people who lost relatives that day read their names aloud.

Linda Spinella, 52, of Wayne, New Jersey, talked about her brother Mark Zangrilli, 36, who worked in the South Tower.

"He had a really contagious laugh," Spinella said. "He loved his kids and he was good to his parents."

Other musical performances included James Taylor's "You Can Close Your Eyes" and flutist Emi Ferguson's rendition of "Amazing Grace."

The service concluded with the chorus singing "I Will Remember You" and four trumpets playing taps.