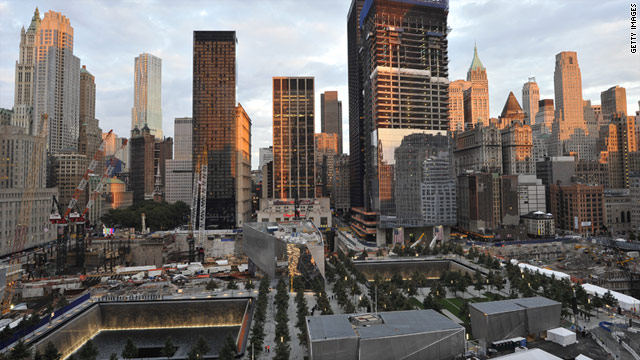 The Ground Zero Memorial is seen in Manhattan
STORY HIGHLIGHTS

New York (CNN) -- Despite exceptional security ahead of the 10th anniversary of the 9/11 attacks, many New Yorkers said they remain undaunted about the potential terror threat.

While most were aware of the possibility of danger this weekend, many said they won't allow it to spoil the commemoration of those who lost their lives.

"I've lived in New York 40 years," said M. Lou Benard, who works for the U.S. Army Corps of Engineers as an event planner and lives on the Upper West Side. "I'm not nervous. I don't believe the fear propaganda."

Ten years ago Sunday, she was on her way to work in Midtown Manhattan.

Building a renaissance for Lower Manhattan

After 9/11, a professional turnaround
RELATED TOPICS

Benard came out of the Chambers Street subway entrance 10 minutes after the plane hit the North Tower at the World Trade Center. "I came out and saw the first tower on fire," she said. "I was in such a state of shock, I thought, who would do that?"

Though she says the sight of police wielding automatic weapons makes her nervous, she's glad they're there.

"It's good they are vigilant," Benard said. "While I was running away, those guys were running toward it."

The engine company lost six men that day. Killeen takes the threats seriously -- "you'd be a fool if you didn't" -- but said that he and his fellow firefighters are in good spirits. They will hold a memorial Sunday at the firehouse.

Across town in Queens, Shawn Foley -- a 33 year-old attorney who works in Manhattan -- says the terrorist threat has not changed his plans for the weekend. "There's so much, not just authorities, but regular people who are aware of (the recent terror threats)."

Bill Parker, a researcher for a biotech research company who lives on Manhattan's Upper West Side, agrees that diligence on the part of authorities make him feel safe.

"I'm relieved because of the Times Square Bomber," said Parker, referring to the foiled car bombing of Times Square in 2010. The attack was thwarted when two street vendors noticed the bomb, and alerted an police officer.

While many talked about memorial events, others said they want to go about business as usual.

Miniature replicas of the Statue of Liberty and novelty coffee mugs adorn shelves and I (heart) New York T-shirts hang on racks at a souvenir shop on 7th Avenue in Manhattan. Employee Farhana Mohammad, who works there, said she's seen more tourists than usual over the weekend.

Rita Silverman, who lives on the Upper West Side, refuses to let the threat of another terror attack scare her.

Those in The Big Apple are contending with random police checkpoints that caused major traffic delays and commuter headaches, but Silverman thinks the measures are worth it. "It's annoying in the sense that it slows you down, but for safety, the pleasures of New York outweigh any discomforts or delays," she said.

But Erfanu Hoque, a taxi driver from Queens, said the security measures have hurt his business.

"I don't make money because I'm stuck in traffic," he said, sitting at a traffic light in Manhattan's Columbus Circle.

But "I'm not nervous about this weekend because of the security. Anything (that is) for security ... that's okay."

At another light at Columbus Circle, police randomly selected cars out of traffic for searches.

Authorities inspected the trunk of the car of Yelena Weinstein, a Brooklyn resident and Manhattan high school teacher.

Just after police waived her on from the checkpoint, she said, "I felt scared when it happened, but it's okay. Let them search me."

His wife said she is not "nervous about this threat, we're just proud to be Americans, and moved by the anniversary.

"It's amazing to see the police and firemen doing their jobs, just like they did that day (10 years ago)," she said.

As Ken Bronstein, a retired businessman from the Upper East Side, reflected on the past 10 years, he said the security precautions were necessary.

"If I were the mayor I'd do the same thing, even if there wasn't a threat."

Bronstein was going to the World Trade Center on 9/11 but was held up waiting for a new refrigerator to be delivered to his apartment.

"A refrigerator saved my life."