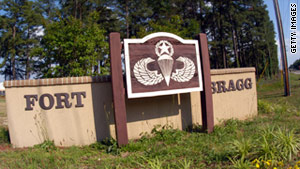 (CNN) -- Authorities are trying to find 14,000 rounds of ammunition missing from Fort Bragg in North Carolina.

The missing ammunition can be used in the M-4 and M-16 assault rifles.

Someone alerted Fort Bragg leadership about the missing items on Wednesday, Ford said.

After the report, the 1st Brigade team, about 3,500 people, was placed on lockdown during an initial investigation, Ford said.

The ammunition was not found and the lockdown was lifted Wednesday night.

"The incident is currently under investigation and all appropriate measures are being taken to locate the small arms ammunition that was discovered missing on Wednesday," said Lt. Col David Connolly, a spokesman for the 82nd Airborne Division.