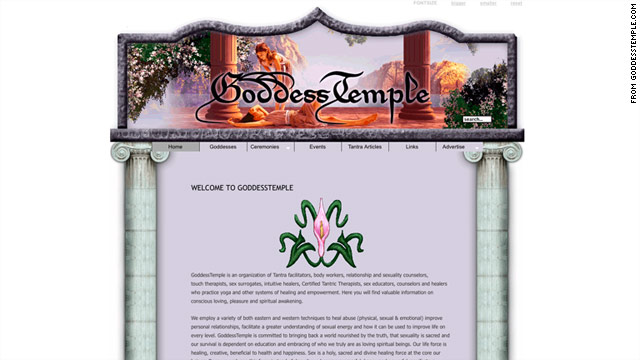 A church in Arizona, called the Phoenix Goddess Temple, has been accused of being a house of prostitution.
STORY HIGHLIGHTS

(CNN) -- A church called the Phoenix Goddess Temple has been accused of being a house of prostitution, and a six-month undercover investigation has resulted in the arrests of 20 women and men who worked there, Phoenix police said Friday.

Authorities are still searching for 17 more people -- all of whom have been indicted -- in connection with the prostitution enterprise, said Sgt. Steve Martos, a Phoenix police spokesman. The 20 people arrested so far have been charged with prostitution or other offenses, police said.

During a Wednesday search of the Phoenix temple and two church-related sites in nearby Sedona, police seized evidence showing that "male and female 'practitioners' working at the Temple were performing sexual acts in exchange for monetary 'donations,' all on the pretense of providing 'neo tantric' healing therapies," Phoenix police said.

A history of neighbor complaints, a recent Phoenix newspaper article, and the temple's website were among the factors prompting authorities to conduct the undercover investigation, Martos said.

"What's unusual is that they were trying to hide behind religion or church, and under the guise of religious freedom, they were committing acts of prostitution," Martos said.

Regarding the Goddess Temple's website, he said: "What they would talk about would seem to be religion. At the same time, they were implying or intimating that they were giving sex therapy."

The website says at one point: "Sex is a holy, sacred and divine healing force at the core (of) our beings. Once we embrace this force instead of deny it, we become successful, happy and powerful manifestors."

The website also features unclothed women, listed as residing in several states, under a "Goddesses" section.

Maricopa County Attorney Bill Montgomery added in a statement: "Freedom of religion does not allow individuals to trade sex for money, no matter how the transaction is portrayed."

The alleged madam, Tracy Elise, who is in her 50s, was arrested and charged with prostitution, illegal control of an enterprise, pandering, and operating a house of prostitution, police said.

Elise was allegedly involved in a similar suspected brothel in Seattle, Washington, which authorities shut down in 2009, Phoenix police said.

Elise or her attorney could not be immediately reached for comment.

Four of the 20 people arrested are men, and two of the four are alleged prostitutes, Martos said. The other two men are a website operator and a school director-teacher at the temple, he said.

The other people arrested are women, he added.

The church is near downtown Phoenix, and the temple also had an office and a house in Sedona, both of which investigators also searched with warrants and where police made three of the arrests, Martos said.