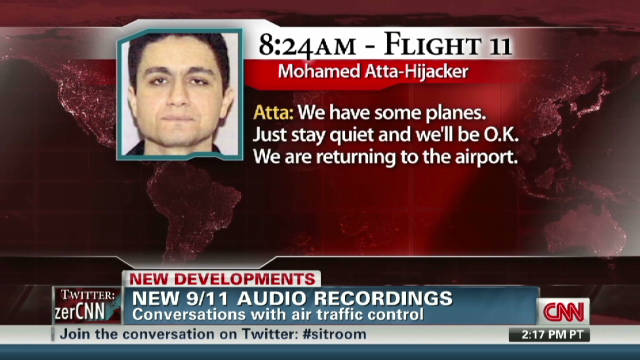 (CNN) -- Extensive audio recordings from September 11, 2001, capture a raw, vivid, moment-by-moment account of the terrorist attacks, directly from those who were in the middle of the crisis.

In excerpts posted online -- some of which were declassified only within the past year -- listeners can hear everything from the wrenching words of a flight attendant on a hijacked airliner and the haunting voices of two of the terrorists in the cockpits, to the cross talk of air controllers and military officials as they come to realize the extent of the attacks.

The recordings have been assembled by researchers and posted at http://www.rutgerslawreview.com/2011/full-audio-transcript/.

Ong: "The cockpit's not answering. Somebody's stabbed in business class, and I think there's Mace, that we can't breathe. I don't know, I think we're getting hijacked."

Ong: "Our Number 1 got stabbed. Our purser is stabbed. Nobody knows who stabbed who, and we can't even get up to business class right now because nobody can breathe."

Five minutes later, hijacker Mohamed Atta is heard, apparently as he is speaking to the passengers.

Controller: "Is that American 11 trying to call?"

Atta: "We have some planes. Just stay quiet and we'll be okay. We are returning to the airport."

Atta: "Nobody move, everything will be okay. If you try to make any moves, you will injure yourself and the airplane. Just stay quiet..."

Controller Joseph Cooper: "We need someone to scramble some F-16s or something up there to help us out."

Sgt. Jeremy Powell of NORAD: "Is this real world, or exercise?"

Cooper: "No, this is not an exercise, not a test."

Military commanders can only guess what the hijackers' intentions could be.

After the first plane hits the North tower, several air traffic controllers -- some of whom can see Manhattan from their windows -- soon spot a second threat.

Controller: "Hey, can you look out your window right now? Can you see a guy at about 4,000 feet, about five east of the airport right now, looks like he's - "

Controller: "Yeah. I see him."

Controller: "Do you see a guy - is he descending into the building also?"

Controller: "Another one just hit the building!"

Soon, military commanders are preparing for the possibility that any number of additional planes could be headed toward New York.

NORAD identification technician 1: "We don't know where it is, though it's headed towards Washington, was the last known information."

NORAD identification technician 2:"I don't know, but somebody's got to get the president going. This is not good."

Maureen Dooley, NORAD identification technician: "I'd have the president airborne, wherever!"

Jarrah: "Please sit down and keep remaining sitting. We have a bomb on board."

After Flight 93 crashes in Shanksville, Pennsylvania, and a fourth plane hits the Pentagon, warplanes are scrambled over Washington, and are given this authorization by a mission commander.

Mission commander: "The Region Commander has declared that we can shoot down aircraft that do not respond to our direction. Copy that?"