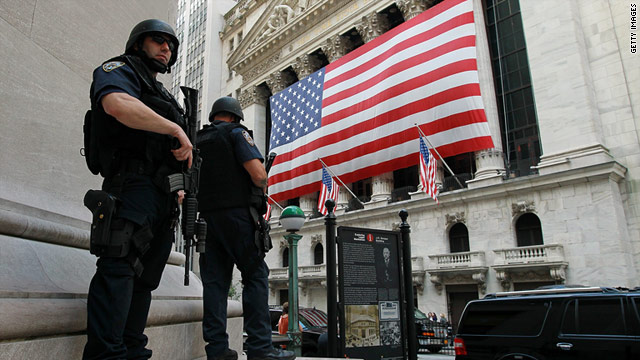 (CNN) -- As the nation enters the weekend marking the 10th anniversary of the September 11 attacks, law enforcement authorities are deploying additional security measures and urging all Americans to be vigilant for suspicious activity.

Much of the beefed-up security has been in the planning well before Thursday's announcement of a potential al Qaeda vehicle bomb plot against New York City or Washington, officials said. And some of the toughened measures won't be visible to the public, officials said.

At the U.S. Capitol, Americans can expect to see "visible strategic security enhancements" such as more uniformed and undercover officers and more police cruisers, as well as deployments of bomb squads, Hazmat and SWAT teams, and K9 units, said Sgt. Kim Schneider of U.S. Capitol Police.

Federal law officials will be sharing information and coordinating operations, Schneider said. For example, Capitol Police special agents are embedded in the intelligence community and assigned to the FBI, Secret Service and Department of Defense, Schneider said.

The efforts are designed "to present a visible deterrent to our adversaries and detect those who may present a threat" as well as "to respond to incidents in our jurisdiction or take protective measures in response to an incident occurring elsewhere in the National Capital region or anywhere around the nation," Schneider told CNN in an e-mail.

"People on the Capitol Grounds or in the area of the U.S. Capitol may notice a more visible presence in addition to the multiple layers of security that are not visible to the public," Schneider said.

Many additional security measures were stepped up Friday in the wake of U.S. intelligence gathering about an al Qaeda-organized vehicle bomb being detonated in New York City or Washington on the 10th anniversary, which falls Sunday, authorities said.

In New York City, officers were stopping and searching trucks as they approached the George Washington Bridge, which links New Jersey with New York City, as well as the Queens Midtown Tunnel, the Holland Tunnel and the Verrazano Bridge, linking Staten Island and Brooklyn. Police also manned checkpoints throughout Manhattan where they examined vehicles, particularly vans and trucks, for possible bombs.

In Washington, where increased police activity began after Labor Day, members of Congress, their staff and visitors were being urged Friday to continue their vigilance for anything suspicious, authorities said.

"Remember, 'if you see something, say something!'" said Wilson Livingood, the U.S. House sergeant-at-arms.

The al Qaeda threat has yet to be corroborated, White House press secretary Jay Carney said.

National security officials have "been running a process for four months, anticipating the need to be extra vigilant, to take extra precautions around this anniversary, the 9/11 anniversary, because, as you would expect, al Qaeda, while it lost its leader when we brought justice to Osama bin Laden, remains a threat to Americans, remains interested in attacking the United States and Americans, and we have to be vigilant against that threat," Carney said.

Vice President Joe Biden urged all Americans to be wary this weekend.

"Continue your life as normal. Be vigilant. Be vigilant," Biden said on NBC's "Today" show Friday. "Report anything that looks suspicious to you. And you know, we went through this before in a different circumstance with the car bomb (attempt) in Times Square (in 2010). There are people who are likely to try over the next period of months and years, but the point is that we are using every single asset we can, including local law enforcement, to help thwart the possibility it could happen."

Some intensified security measures will be out of the public eye, Homeland Security Secretary Janet Napolitano said.

"Our security posture includes a number of measures both seen and unseen, and we will continue to respond appropriately to protect the American people from an evolving threat picture both in the coming days and beyond," she said in a statement.

In Washington's subway system, police were conducting random baggage tests Friday as commuters came down the escalator -- measures that were previously planned and weren't a result of the potential al Qaeda threat, said Michael Taborn, the transit system's police chief.

Dog teams patrolled platforms, and an officer with a flashlight examined tracks after trains passed.

Washington, D.C., Mayor Vincent Gray said Friday the city is "redoubling" its security efforts in the wake of the unconfirmed al Qaeda threats, with officers working 12-hour shifts and operating under a restricted-leave policy.

"We take these threats seriously -- as we do all threats to our city -- and citizens should know we are taking all the appropriate steps to ensure their safety," Gray said in a statement.