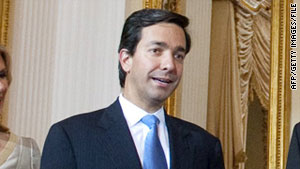 (CNN) -- The Puerto Rico Police Department has a long pattern of violating citizens' constitutional rights through excessive force and unwarranted searches, the Justice Department said in a report released Thursday.

The analysis by the Justice Department's civil rights division found the U.S. commonwealth's police force is "broken in a number of critical and fundamental respects."

Bucking the trend of decreasing crime in the United States, violent crime in Puerto Rico increased 17% between 2007 and 2009. The island has also seen a number of large protests in past years over issues such as the cost of public education and job cuts.

Police confronted these challenges with too heavy a hand, the report said.

In response to student protests in August 2009, police used chemical agents, batons and physical force against protesters, according to the report. Protesters at other demonstrations have been met with chokeholds and rocks thrown by police, the report said.

Puerto Rico has used excessive force that has violated and suppressed people's right to exercise free speech, the Justice Department said. There is also evidence of unlawful search and seizure that violate the Fourth Amendment.

Many of the abuses come from the police department's strategy of sending tactical officers for community policing, according to the report.

The Justice Department also found the police department fails to police sex crimes and cases of domestic violence, and discriminates by targeting people of Dominican descent.

"We find that these deficiencies will lead to constitutional violations unless they are addressed," the report said.

It is a "longstanding practice" of the department to use force -- including deadly force -- in cases where lesser force or no force would have sufficed, the report said, adding that hundreds of people have been unnecessarily injured.

The Justice Department also contends that there are problems not just with the way the Puerto Rico police department carries out its functions, but among the officers themselves.

Between 2005 and 2010, there were more than 1,700 arrests of police officers on charges ranging from theft to murder, the report said.

Current police policies fail to guide officers, and there is a lack of oversight by superiors, according to the report. Training is also insufficient, it said.

Fortuno said he was aware there were problems at the police department for years.

The governor also said that police have been meeting with the Dominican community in Puerto Rico to address issues of discrimination in policing.

One aspect of the report that Fortuno did not address was police corruption. The Puerto Rico Police Department is the second-largest in the United States.

Assistant Attorney General Tom Perez described the crime situation in Puerto Rico as serious. There have been 786 killings so far this year in what looks to be a record-setting year.

One refrain that federal investigators heard repeatedly in Puerto Rico is that they had to make a choice between preserving public safety and abiding by the Constitution.

He said history has shown that crime declines when the public has confidence in its police.

"Reforming the department won't be easy, and it will take time," Perez said.

He gave Fortuno's government credit for giving investigators access to documents and personnel since the probe was opened in 2008.

Nationwide, there are 17 investigations such as the one in Puerto Rico against police departments in the United States, Perez said. Such probes are designed to make systematic changes in those departments.

The American Civil Liberties Union, one of the groups that pushed for the investigation, said the report confirmed the level of violence and corruption in the Puerto Rico Police Department.

"With the facts laid bare, it is now the responsibility of the Puerto Rican government and the Justice Department to make sure the police abuse and brutality end as quickly as possible," ACLU Executive Director Anthony Romero said in a statement.