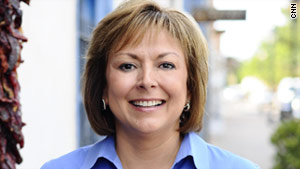 Santa Fe, New Mexico (CNN) -- New Mexico -- one of three states that allow undocumented immigrants to obtain driver's licenses -- is debating whether to change the practice.

The state's lawmakers were scheduled to take up the issue in a special session on Tuesday. However, there are nearly a dozen other issues they must address by the end of the session, which could last up to 30 days.

The session was originally scheduled to focus on redistricting for statewide elections, but the governor put the driver's license issue on the docket.

Republican Susana Martinez, the nation's first Latina governor, campaigned on a promise to stop undocumented immigrants from getting licenses.

The state's House in March passed a measure to start requiring license applicants to have Social Security cards, which are available only to legal residents.

The Senate has rejected House Bill 78, however. A push is underway to swing the vote in the Senate, with Martinez leading the effort.

Immigrant-rights advocates defend the current practice. It was intended to offer undocumented immigrants "the opportunity to buy insurance, register their vehicles and have a driving record available to all law enforcement," said Marcela Diaz of Somos Un Pueblo Unido (We Are a United People).

But critics say the practice is turning New Mexico into a magnet for fraud.

"Currently, illegal immigrants from all over the country come to New Mexico to obtain a license without having the intention of staying here," said Demesia Padilla, the state's secretary of taxation and revenue.

Some scofflaws sell their residency information. One woman, Rosa Pardo-Marrufo, confessed to allowing her address to be used -- charging up to $700 for each application. She was arrested in 2009 and is serving 10 years in prison for fraud.

The state Taxation and Revenue Department has pushed a "residency certification program." Aiming to expose residency fraud, officials began sending letters in July to 10,000 of the more than 84,000 immigrants who have been issued a license without a Social Security number. They've been asked to prove their state residency or lose their licenses.

On Thursday, a New Mexico district judge placed a temporary restraining order on residency certification, in response to a lawsuit against the Taxation and Revenue Department by the Mexican American Legal and Educational Defense Fund (MALDEF). A hearing on September 13 will determine whether Judge Sarah Singleton's restraining order will become permanent.

Utah and Washington are the only other states that grant undocumented immigrants driver's licenses.