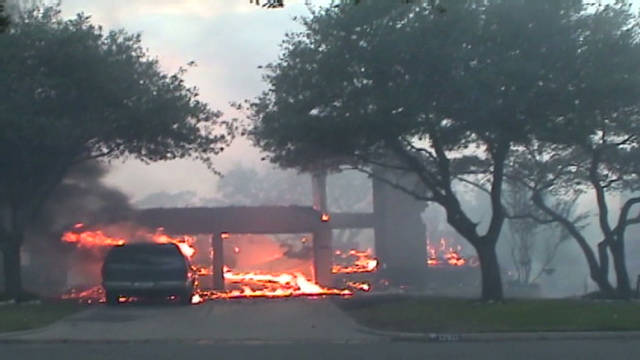 'There's nothing left of these houses'
STORY HIGHLIGHTS

The largest of the fires is in Bastrop County, southeast of Austin, said Lexi Maxwell, a spokeswoman with the Texas Forest Service. The blaze has so far scorched some 14,000 acres and is threatening about 1,000 homes, she said.

It forced parts of state highways 71 and 21 to shut and additional road closures are expected, Maxwell said.

Julian Ochoa, 23, was evacuated from a Bastrop subdivision Sunday afternoon. He said he grabbed his dog, a toothbrush, his birth certificate and a few pictures.

"It was like a storm coming through. You could smell the earth burning," said Ochoa, who doesn't know yet whether his home is OK or not. "All of Bastrop is a giant smoke cloud."

Fires were also reported in Travis, Leon, Colorado, Burnet and Caldwell counties. About 190 homes were evacuated in Travis County.

A spokeswoman at the American Red Cross said it had opened four shelters and anticipates opening more.

"They are coming in so fast. The intelligence is sketchy at this point. There's a lag of information," Maxwell said about the fires.

Texas is currently battling its worst fire season in state history. A record 3.5 million acres have burned since the start of the season in November.

CNN's Stephanie Gallman and Anna Gonzalez contributed to this report.