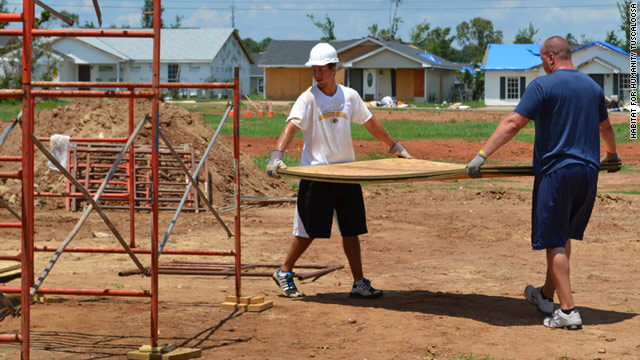 (CNN) -- Tuscaloosa and the University of Alabama paid tribute Saturday to first responders who aided neighbors staggered by the April 27 tornado that cut a swath through the city and killed 47 people.

The Crimson Tide's first football game since the storm included a video, a musical program and a moment of silence for the victims, among them six university students. A houndstooth ribbon painted on the field symbolized legendary coach Paul "Bear" Bryant and a community still in grief.

"It was just wonderful. It really was," the Rev. Kelvin Croom said of the observances. "It was a time to come together."

It was also a victorious day for No. 2 Alabama, which defeated Kent State University 48-7.

No one could have predicted how much of what happened off the sidelines this year would mean to Saturday's contest.

For the 101,000-plus fans who jammed the stands, the contest against the Golden Flashes was an opportunity to pause from rebuilding to enjoy the rites of autumn.

Kent State sent four players in late July to help in the rebuilding and conduct a clinic for underprivileged kids. Since then, Alabama fans have expressed their appreciation.

"The ovation when we came on the field was pretty amazing," said Alan Ashby, assistant athletic director for communications at Kent State. "The crowd was very supportive."

"I am an Alabama fan. Now I'm (also) a Kent State fan. I saw the character and class of Kent State athletics," said Bob Johnson, executive director of Habitat for Humanity Tuscaloosa.

Habitat and Alabama head coach Nick Saban's "Nick's Kids Fund" were instrumental in the building of a new home for a family displaced by the tornado.

Saban, who played and coached at Kent State, wants to build 13 homes, to match the number of national championships the Crimson Tide has won.

On April, 27, the front wall of the Dowlings' mobile home blew in. The bedroom was sucked out. The roof was left unattached.

I am an Alabama fan. Now I'm (also) a Kent State fan. I saw the character and class of Kent State athletics.
--Bob Johnson, executive director of Habitat for Humanity Tuscaloosa.

Now, only days away from moving into their new home, the Dowlings attended the game as guests of the opposing team and visited with new Kent State head coach Darrell Hazell.

More than 100 University of Alabama students, including gymnasts, cheerleaders and football and basketball players, pitched in on the Dowling residence, too.

"When one brother is down, we are all down," said Croom, pastor of College Hill Baptist Church, largely destroyed by the tornado.

"I absolutely adored all of the guys," Dowling said of the Kent State and Alabama volunteers. Athletes just wanted to help, rather than be recognized, she said.

"Not many people get what we got," Dowling said of the new residence and outpouring of love and support.

The family couldn't qualify for a conventional mortgage because Bob Dowling, who works as a disaster recovery technician, doesn't receive checks 52 weeks a year, she said. By going with Habitat, the Dowlings will go from a $600 monthly mortgage to less than $400.

Kent State running back Jacquise Terry said he's become closer to the three teammates who went with him from Ohio to Tuscaloosa. "There is more to life than football."

"My heart is still going out to families," the Phenix City, Alabama, native told CNN Friday as he traveled on the team bus.

The tragedy has touched almost everyone in the city.

Alabama offensive tackle D.J. Fluker lost his apartment in the storm. He helped out with the Dowling home.

"Everyone expects him to be in a negative place, sad and down," said Alabama associate athletics director Jeff Purinton. "He thinks it's his responsibility to be positive."

A scholarship has been established in Harrison's memory.

Visitors to Tuscaloosa still see scenes of devastation, though most of the debris has been removed.

"You make a turn and all of a sudden everything is gone," said Kent State's Ashby. "No limbs. No trees. Houses off their foundations."

The Kent State athletes were heartened by the response they got during their visit, Ashby said. "People came up and thanked us. One guy said, 'Roll Tide and go Flashes!' "

While the fact that Saban is a Kent State alum made a connection for the trip, "We knew it was the right thing to do," Ashby said.

Students on the Alabama campus agreed the game was an ideal time for the community to come together.

"I think that it means a return to normal," said Lance Ledbetter, a junior from Grant, Alabama. "This whole community has been so upset about this tornado. Let's take our mind off rebuilding for a second and get back to rooting on Alabama football."