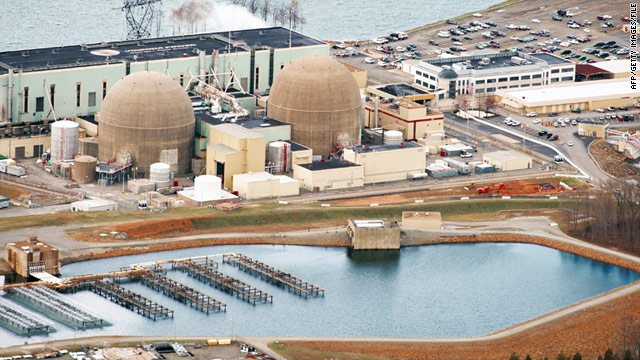 The cylinders, each 16 feet tall and weighing 115 tons, were not damaged, and no radiation was released, said Rick Zuercher, spokesman for Dominion Virginia Power, which operates the North Anna Power Station near Louisa, Virginia. Monitors were hooked up to the casks to determine any abnormalities, he said.

He said the casks' movement was known shortly after the quake, which had an epicenter less than 20 miles from the plant, but the news was not released to the public.

"We had a lot going on," Zuercher said. "There was no indication of any problem ... and there isn't any problem."

Besides those casks, which are vertical, some of the horizontal bunkers holding spent fuel also were affected. The concrete "came loose on the face" of "a few" of the bunkers, Zuercher said, but the damage is not considered serious. The bunkers -- of which 13 of the 26 hold rods -- are each 16 feet long and weigh 50 tons.

It is the first time such casks have been shifted by an earthquake in U.S. history, said Roger Hannah, spokesman for the Nuclear Regulatory Commission, as it's the first time a quake of this magnitude was felt at a nuclear plant in the country.

The safety standards for such casks, he said, are "unbelievable." They undergo a rigorous series of tests, including crash tests and burning. "To say they are robust would be an understatement," Hannah said.

Zuercher, however, confirmed a report in the Washington Post that Dominion Virginia Power had notified the NRC last Friday that the earthquake might have shaken the power station more than it was designed to handle.

The NRC already has an "augmented inspection team" at the North Anna plant to conduct a review of effects from the earthquake. The team will review the casks' shifting as part of that investigation, Hannah said.

The NRC initially sent a seismic expert and a structural expert to assist resident inspectors at the site after the earthquake, but "further reviews indicated that additional inspection is warranted," the commission said in a statement issued Monday. An augmented inspection team is formed "to review more significant events or issues" at NRC facilities, and includes technical experts and additional inspectors.

An alert was declared at the North Anna station just after the quake struck. The plant's two units shut down automatically after the facility lost off-site power, according to the NRC. Emergency diesel generators provided power to cool the reactors until off-site power was restored a few hours later.

"An alert is the next-to-lowest NRC emergency classification for plant events, and the North Anna station exited the alert after off-site power was restored," the commission said in a statement.

Both reactors remain in what is called a "cold shutdown," Zuercher said. There is no timetable for their reactivation, he said.