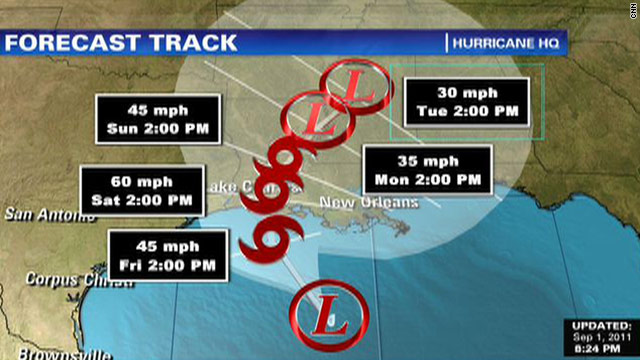 New Orleans -- much of which sits below sea level -- is likely to see 8 to 10 inches of rain in the next few days, Mayor Mitch Landrieu told reporters.

"What we do know is there's high wind, there is a lot of rain and it's going slow," Landrieu said. "That's not a good prescription for the city of New Orleans should it come this way."

It was six years ago this week that Hurricane Katrina slammed into the Gulf Coast, devastating coastal Louisiana and Mississippi and inundating much of New Orleans.

Landrieu urged residents to start collecting the items they might need in case of flooding or a hurricane, such as bottled water, batteries, nonperishable food, first-aid kits and family documents. They may not be needed this time, he said, "But we seem to be entering the more active phase of the storm season.

"It is important for citizens to remember it is individual preparation at the end of the day that matters the most," he said.

Firefighters had been battling a huge wildfire in a swamp on the city's east side for several days as the blaze spread smoke over much of the city. Landrieu quipped that city officials had hoped for rain, "and it appears as though our prayers have been answered."

As of 7 p.m. Thursday, the tropical depression was centered about 225 miles south of the mouth of the Mississippi River and was moving northwesterly at about 6 mph. It had maximum sustained winds of 35 mph.

In advance of the weather, BP and ExxonMobil ordered their Gulf rigs evacuated and have shut down their wells, spokesmen for those companies told CNN. Chevron, meanwhile, has ordered nonessential workers off the platforms, and Shell said it had begun taking some of its workers back to shore Thursday afternoon.

"Weather conditions are already impairing staff movement, but we are using all available resources to safely evacuate employees," Shell said in a written statement. "The number of evacuated personnel will depend on weather conditions, and we will only transport personnel if safe to do so."

"Interests along the entire northern Gulf of Mexico coast should monitor the progress of this disturbance," they noted.

In the state of emergency declaration, Jindal authorized the state Homeland Security and Emergency Preparedness director "to undertake any activity authorized by law which he deems necessary and appropriate" to prepare for the storm.

CNN's Dave Alsup and Vivian Kuo contributed to this report.