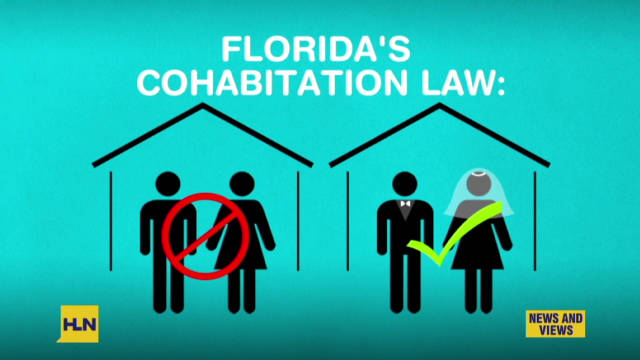 (CNN) -- A Florida lawmaker is pushing to repeal a state law that makes it illegal to cohabitate with someone who is not their spouse, and makes it a crime punishable by a $500 fine and up to 60 days in jail.

According to 2010 U.S. Census figures, at least 544,907 Floridians reported being an "unmarried partner" -- meaning they live in an intimate relationship with someone they are not married to, and thus are in defiance of Florida statute 798.02.

"If any man or woman, not being married to each other, lewdly and lasciviously associate and cohabit together ... they shall be guilty of a misdemeanor of the second degree," the law states.

Last week, state Rep. Ritch Workman filed legislation -- HB 4021 -- to repeal that provision, as well as a related one that bars people from "living in open adultery."

He told HLN's Richelle Carey on Thursday that the current law is unenforceable and unrealistic, especially given the growing numbers of couples in Florida and elsewhere who live together but are not married.

"What you do in your bedroom is your business, not the business of my great state," said Workman, a Republican from Melbourne, adding that the statute is rarely enforced. "Quite frankly, I just want it gone."

While not speaking specifically about the Florida statute, Glenn Stanton from the advocacy group Focus on the Family said Thursday that there is a role for government in promoting marriage as an alternative to cohabitation. He cited data that shows higher marriage rates generally correlate with a lower likelihood of crime, fewer domestic-abuse cases and better educational results for children.

"You cannot help but be interested in the state of marriage in your state," said Stanton, the group's director of family formation studies and author of the new book, "The Ring Makes All the Difference."

"It's not just about people living together, but it's how they are related."

Stanton acknowledged there are limits to what the government can do to promote marriage, noting that arresting all those who are cohabitating isn't realistic or necessarily fair. He further noted that many people now do not marry because they've been scarred by their own parents' divorces and they choose to wait to marry because of their respect for the institution.

But he said that there are "very negative consequences" for those who cohabitate, even when they do eventually marry, on their relationships as well as society in general.

Stanton adds that he generally favors measures such as tax incentives to marry rather than cohabitate, clear consequences in divorce courts for those who flout their marriage vows, and "pro-fatherhood" initiatives to support two active parents in children's lives.

"The government has always done this kind of thing," he said. "The state does have an interest in clearly making sure that someone does not go out and sleep with whomever they want to."

Workman, himself married with two children, stressed that his legislative initiative is not anti-marriage or anti-family.

Rather, he described it as a practical move to remove statutes that are no longer realistic in today's society. Workman said most legislators, even those who are more conservative in Florida, don't want to discuss cohabitation and adultery.

"And I say 'Great, let's not talk about it,'" he said. "Let's talk about an unenforceable and unenforced law that needs to be off the books.