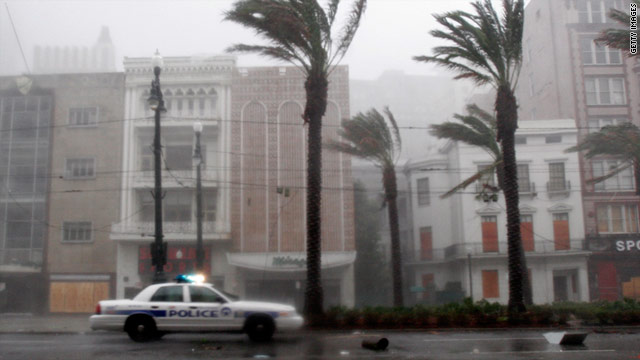 The widespread death and destruction caused by Hurricane Katrina in 2005 dictated the retirement of the storm name.
STORY HIGHLIGHTS
RELATED TOPICS

(CNN) -- In another time, Tropical Storm Katia, which was barreling across the Atlantic early Wednesday, would have been called Katrina.

That's because the National Hurricane Center uses a roster of names it repeats every six years.

However, once a large storm ravages a coast and causes too much death and destruction, its name is retired out of sensitivity to the victims and for historical purposes. This year's list has a few changes because the 2005 hurricane season was particularly severe.

Among the names retired in the 2005 Atlantic season is Katrina, which was replaced with Katia.

Here is an explainer on how storm names are chosen:

How did the idea of names come about?

The United States started off by naming storms using a latitude/longitude designation of their origin. The names were hard to remember and convey to the public, so meteorologists started naming storms after their wives and girlfriends during World War II.

The naming method -- which started in the Pacific -- was so easy to remember, meteorologists adopted it for the Atlantic storms.

When did this change?

In 1950, meteorologists began the use of phonetic alphabets such as Able, Baker and Charlie for the North Atlantic storms, according to the National Weather Service.

How did storms end up with female names ?

In 1953, the National Weather Service changed its naming convention again. It kept the alphabetical order but used female names.

In 1979, forecasters began throwing in male names into the mix. They now alternate male and female names in alphabetical order.

Are the names random?

At the beginning of each Atlantic storm season, the hurricane center publishes 21 storm names, which are recycled every six years. The names are in alphabetical order. For example, the predecessor to Katia was Jose. Before Jose, there was Irene.

What happens if there are more than 21 storms?

If the Atlantic sees more than 21 named storms in a season, it resorts to using the Greek alphabet: Alpha, Beta, Gamma, Delta and so on.

Does the rest of the world have the same naming convention?

Since 1978, the United Nations' World Meteorological Organization has a predetermined list for each basin of the world. Not all basins follow the same rules. For example, the Northwest Pacific basin mostly uses names of flowers, animals and trees.

What makes a good storm name?

Why do some of the names sound unfamiliar?

Not all names are derived from English. French and Spanish names are used as well, since those are the other major languages for countries bordering the Atlantic Ocean.

What other storm names have been retired?

The 2005 hurricane season was especially busy, and ravaged the Caribbean, and the Atlantic and Gulf coasts. Five storm names were retired a year later, including Dennis, Katrina, Rita and Stan.