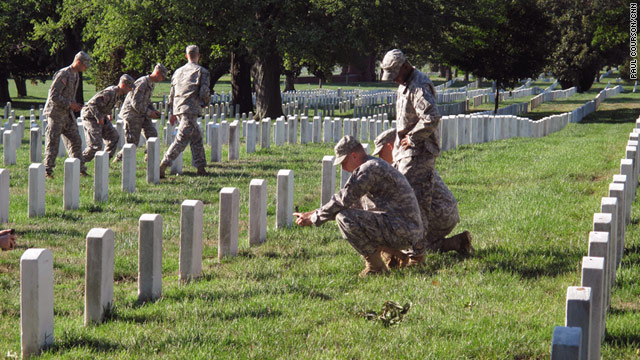 Arlington, Virginia (CNN) -- For the first time in its history, Arlington National Cemetery may soon have an accurate record of all the people buried there. The project involves the creation of a digital database that now is substantially complete, according to officials with the Graveside Accountability Task Force.

"They had chunks of databases along the way," said U.S. Army Lt. Col. Jamie Wilmeth, who is helping lead the analysis and cross-checking of records that started in the 1800s with handwritten entries in hardbound volumes.

He told CNN, "Now it's gonna be a common database, and it's going to be accurate."

Arlington was tarnished last year by the finding of more than 200 graves that had been misidentified or mislabeled, and by the discovery of dozens of discarded headstones apparently being used to shore up a small stream in a remote corner of the cemetery.

A previous superintendent, John C. Metzler Jr., was punished for poor management after the discovery of numerous instances of bodies being buried in the wrong place and incorrect headstones on graves.

Congress ordered a task force to fully document who's where.

Using a combination of high technology and old-fashioned research, the team is commissioned to compile a verified electronic database with no discrepancies among the records. Their work should be ready for an initial review by the end of September.

During a demonstration Tuesday, U.S. Army troops armed with smartphones took photographs front and back of headstones, and recorded the precise GPS location where the images were taken. An app developed for the project then took the information and e-mailed it directly to a database.

That portion of the project is usually done at night when the lighting on the marble headstones can be controlled for the best quality photograph. Eventually the pictures will be available in a searchable database for the public.

"My team does about 1,000 pictures per night," said, U.S. Army Spec. Matthew Caruso. "The main problem during the day is the glare from the sun, that makes it difficult to see the data on the gravestone."

The photographs and locations are then combined with other official records that have been kept over the years, and researchers sometimes find mistakes.

"The methodology that they used was perhaps a little lacking," Wilmeth said, with a half-dozen forms that were used as records of internment (ROI). He explained, "In one of those ROIs there's no entry box for date of birth, but then you see some of them are handwritten in there."

At its worst, Wilmeth agreed with a suggestion the records-keeping was sloppy. "Things were done wrong in the past, let's call it that," he told CNN.

With the combination of headstone photography, GPS location and the document scanning of earlier paperwork, errors are falling into three categories: critical, serious and administrative.

Critical errors that are being repaired include missing remains, unknown locations, the wrong name and the wrong record. Serious errors include typographical mistakes or erroneous dates.

Administrative errors can include discrepancies in a service record, military awards and honors, and religious affiliation.