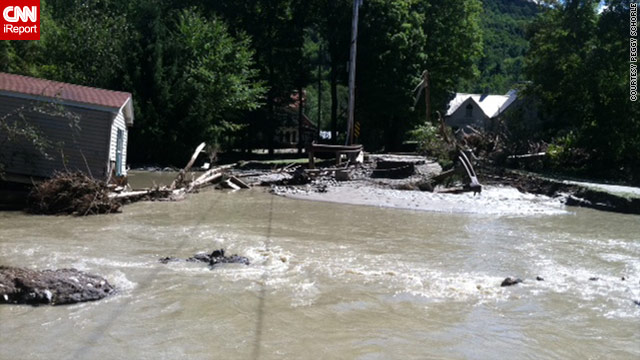 (CNN) -- Pittsfield, Vermont, population 427, reacted in its own special way to severe flooding from Hurricane Irene that has turned their community into an island.

They had a town barbecue.

"No one in this town was expecting the flooding to be what it was, and we've all gotta eat," said Jason Evans, the owner of the skiing enclave's popular Clear River Tavern.

"My house is high and dry, but there was water all around my restaurant," he said. "We just had everybody come to the park and we cooked up hamburgers and hotdogs.

"I would have lost everything anyway, so why not feed some folks?"

On Tuesday afternoon, more than a full day since Irene's effects were being felt along the northeast in New England and upstate New York, Pittsfield was the epitome of positivity. The fact that roads were impassable and homes were partly underwater didn't seem to send residents into a fury.

Married and stranded in Vermont

Explain it to me: Weather forecasting

Everyone in the landlocked rural state is suffering, a few pointed out. No one had been reported injured or killed in the town. They could start pumping their fists and shouting but that wouldn't dry a darn thing, they said. They are confident officials are doing what they can.

Vermont Gov. Peter Shumlin toured devastation from the air. He said the flooding he saw is probably the worst the state has ever experienced. Three people in Vermont have died. Many areas of the state were still under flood watches and warnings early Tuesday.

CNN.com reached Evans at Pittsfield's fire station. It's hot today in Pittsfield, and the station is a nice, air-conditioned break for people who are without electricity, a problem a reported 50,000 Vermonters are dealing with.

"We're not in dire straights yet," said Evans. "I think everybody here is smart enough to have some pasta and beans in their cupboards. But that isn't going to last forever."

"That's a good sign and so we'll be patient," said Peggy Schorle. She was chatting on her cell phone which she's charging at the general store. And that is the Pittsfield general store, the other place in town besides the fire station that has a big generator. The store, across the street from the fire station, has the town's only two gas pumps, she said.

It was about 1 p.m. ET when CNN.com spoke with Schorle.

"The people who run the general store said we could start pumping our gas around noon, but now they say 5 p.m.," she said.

"They're rationing it, a smart thing," she said. "I guess we could have bad attitude about the whole thing, but what good would that do?"

Most are refueling their personal ATVs so they can get around, Schorle said.

It's not a problem if you don't own an ATV, she said, because most people are loaning theirs.

A retired health care administrator, Schorle and her husband thought they were making a smart move by getting out of New Jersey to spend some time at their vacation home in Pittsfield.

See photos and video of the area around Schorle's home

Their house is on a mountain, and so wasn't seriously damaged by flooding.

George Deblon said he's had a little flooding at his home. The 48-year-old who grew up in Pittsfield has been the town's road commissioner for 20 years.

Deblon's been scooting around town on an ATV, making sure people know the latest. On Monday he said that there was a town meeting at city hall. But city hall wasn't big enough to accommodate all the people who showed up.

"So we had it at the big church," he said. "There's one church in town. We just let people know about the meetings word of mouth.

"We're going to keep things real calm around here," Deblon said. "We see the helicopters and we think we'll get some help soon. We're optimistic."