The Old Guard carries on in all kinds of weather, including hurricanes 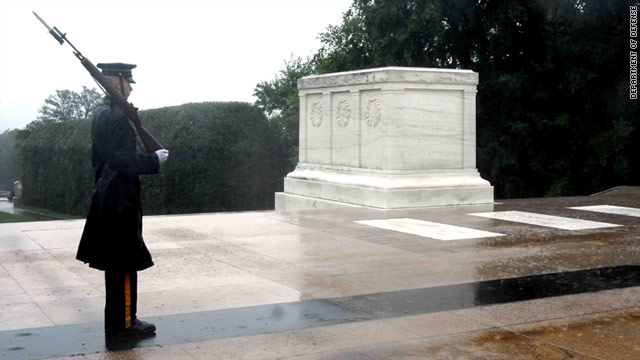 The U.S. Army's 3rd U.S. Infantry Regiment has guarded the Arlington's Tomb of the Unknowns for more than 63 years.
STORY HIGHLIGHTS

(CNN) -- The U.S. Army's 3rd U.S. Infantry Regiment -- The Old Guard -- has posted watch at the Tomb of the Unknowns at Arlington National Cemetery every second of every day for more than 63 years.

And they weren't about to let a hurricane get in the way of their tradition.

Members of the regiment earned new admiration this week for their unwavering dedication during Hurricane Irene. As the storm whipped the capital with driving sheets of rain, soldiers kept their vigil at the tomb, one hour at a time.

Word of their service during the storm has prompted hundreds of comments on the regiment's Facebook page since Saturday, including plenty of "hooahs" -- the Army battle cry.

"So proud of you guys!" said Kristina Wilson. "Thank you for the honor you are showing to these brave men who are known but to God. You might meet them one day and they can say themselves how proud of you they are."

"Very few things get me choked up, but seeing this put tears in my eye," said Greg Ledet of the photos showing the sentinels at the height of the storm.

"Thank you seems not enough, your stewardship of our collective history is wonderful," David Magart said. "Honor, integrity, respect, these are the values your demonstrate and live by."

The foul-weather display even prompted some cross-service pride from George Gipson.

"You certainly have the respect and admiration of *this* Marine. Carry on."