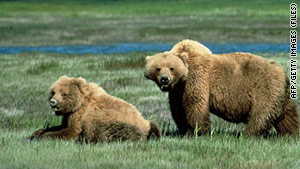 Only about 1,000 grizzlies remain in the continental U.S., according to the National Geographic Society.
STORY HIGHLIGHTS
RELATED TOPICS

(CNN) -- A bear attack caused the death of a hiker whose body was found on a trail in Yellowstone National Park, officials confirmed Monday.

The body of John Wallace, 59, was discovered Friday by two hikers along the Mary Mountain Trail, an area of the park that had been closed to hikers, according to park services.

Rangers discovered signs of grizzly bear activity, including tracks and scat, or bear droppings, in a park campground where they believe Wallace pitched a tent on Wednesday, the park said in a news release.

Autopsy results concluded that Wallace, a Michigan resident, died from traumatic injuries he received after being mauled by a bear. It's the second fatal attack in Yellowstone National Park this summer, said Park Superintendent Dan Wenk.

Just last month, a 57-year-old California man was killed by a bear within the same 10-mile area of the park, Wenk said.

Park managers determined that man was killed by a bear protecting its cubs. Despite the close proximity of the latest attack, the officials do not think the same bear is responsible for Wallace's death because no evidence of cubs was found at the scene.

DNA tests on hair samples from the site will be performed to confirm suspicions that a different bear was involved in the second attack, Wenk said.

Over the past 25 years, Yellowstone has averaged 1 or 2 encounters a year that resulted in injuries, Wenk said.

Prior to this summer's attacks, the last fatal bear mauling was in 1986, he said.