Help for victims of Irene 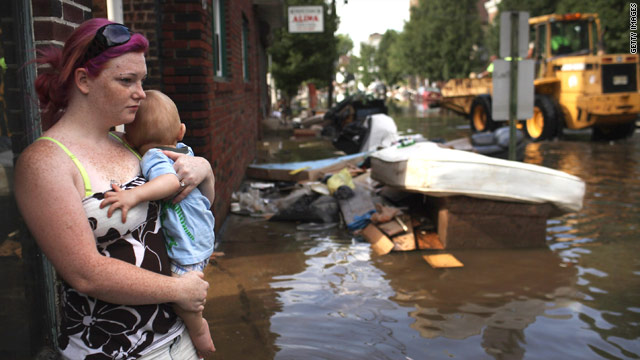 A woman and her baby look out over a flooded street Wednesday in Wallington, New Jersey.
STORY HIGHLIGHTS

(CNN) -- Residents are still dealing with the aftermath of Irene -- a massive storm that pummeled the East Coast.

The storm killed 43 people from Florida to New England and some of the worst flooding struck Vermont, New Jersey and upstate New York.

More than 1.1 million customers were still without power Thursday from North Carolina to Maine, the U.S. Department of Energy said.

Relief organizations are working to help victims in Irene's path. There are ways you can help.

At least 1,300 people awoke Wednesday morning in Red Cross shelters up and down the East Coast. The Red Cross has provided about 54,000 overnight shelter stays since the storm hit.

"The storm may be over, but our work is far from done," said Gail McGovern, Red Cross president. "We expect this disaster relief operation to be a very large operation that will continue for several weeks."

The organization has served more than 680,000 meals and snacks and has handed out more than 29,000 relief items such as hygiene kits, mops and tarps.

To donate to relief efforts, visit the website or text the word "REDCROSS" to 90999 to make a $10 donation.

Irene has also caused a shortfall of more than 2,700 blood donations over the past few days. To donate blood, go online or call 1-800-REDCROSS.

The Salvation Army is helping survivors who are still struggling with the floods and power outages left by Irene.

The organization has served nearly 150,000 meals, snacks and drinks to storm victims from the Carolinas to New England.

The group has been providing warm meals to evacuees and emergency responders in flood impacted northeastern states including New York and Vermont.

A Disaster Relief Unit has been set up in New Bern, North Carolina. Staff and volunteers began removing downed trees and assisting homeowners on Sunday afternoon.

Teams from Operation Blessing International are in the Hampton Roads area of Virginia clearing debris from homes and providing food to residents whose homes were flooded.

The group is accepting volunteers in teams of three or more people to help remove debris, repair homes and serve hot meals.

To volunteer, call the organization's office of National Volunteer Management at 1-757-226-3407 or e-mail volunteer@ob.org.

AmeriCares launched a $500,000 U.S. Disaster Recovery Initiative to aid survivors of Irene and other recent storms.

In hard-hit North Carolina and Virginia, AmeriCares is helping to deliver more than 120,000 bottles of water for families affected by severe flooding and major power outages.

The group has distributed food, clothing and medicine to about 1,600 evacuees.