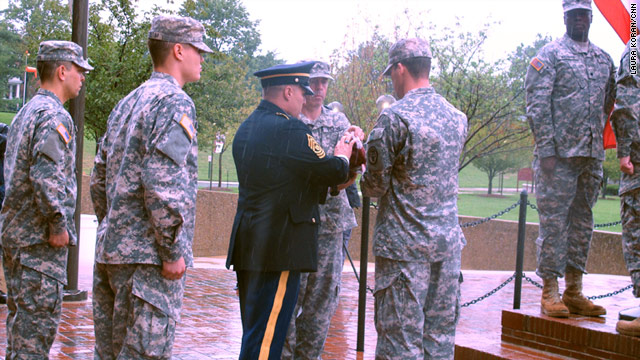 The flag was lowered for the final time Saturday as Walter Reed Army Medical Center closed it doors.
STORY HIGHLIGHTS

The official closing was conducted a day earlier than originally planned in order to avoid the worst of Hurricane Irene, but the ceremony was still marked by grey skies, heavy rain and strong winds. This somber weather caused Lt. Gen. Eric Schoomaker, the Army surgeon general, to remark in his closing speech, "clearly the heavens are struggling with the finality of this too."

Despite the weather, a sizeable crowd of Walter Reed staff and military personnel attended the outdoor ceremony with their families. For many of them, the closure of the Walter Reed facility marks the end of an era.

The hospital center has been in operation for more than a century and has provided medical care to many of the nation's wounded soldiers. It has also served as a leading center for medical research.

The new combined facility, known as the Walter Reed National Military Medical Center, is now the country's largest military medical center. It will be run jointly by the Army and the Navy.