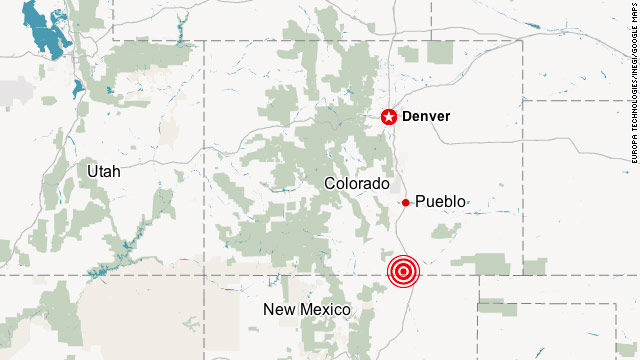 (CNN) -- A moderate 5.3-magnitude earthquake that rattled southern Colorado early Tuesday morning was the largest to hit the state in more than 40 years, the U.S. Geological Survey said.

The quake's epicenter was seven miles southwest of Cokedale, and 180 miles south of Denver. There were no immediate reports of casualties.

A dispatcher at the sheriff's office in Las Animas County, which includes Cokedale, said the quake lasted almost 30 seconds. The office received reports of rocks falling on a highway and of some structure damage.

It was the largest in a series of earthquakes that struck the area. As of 5 a.m. local time (7 a.m. ET), the USGS reported seven quakes centered just south of Cokedale since midnight.

Amy Vaughan of the USGS said the 5.3 magnitude ties that of an earthquake Colorado suffered on August 9, 1967.

In 1973, the USGS originally reported a quake with a magnitude of 5.7, but it turned out that was caused by an explosion, Vaughan said.

The largest recorded quake to hit Colorado had a magnitude of 6.5 on Nov. 7, 1882, near Rocky Mountain National Park, Vaughan said.