Attorney for Strauss-Kahn accuser believes charges to be dropped 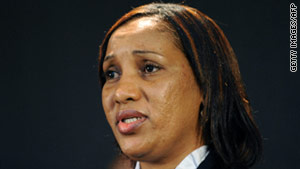 Nafissatou Diallo is expected to meet with prosecutors Monday about her charges against Dominique Strauss-Kahn.
STORY HIGHLIGHTS

Diallo and her attorneys -- Kenneth Thompson and Douglas Wigdor -- received a letter Friday inviting Diallo to meet Monday with prosecutors for an update on the case.

"The letter, the tone of the letter, suggests that the Manhattan district attorney is going to drop the criminal case, " Thompson told CNN Sunday.

A status hearing for the case is scheduled for Tuesday. It has been delayed twice before. The letter to Diallo explains that the meeting will be an opportunity for officials to explain what will happen at the hearing, according to her attorneys.

Manhattan District Attorney Cyrus Vance is widely expected to reveal at the hearing where the case stands. He could drop all or most of the charges or move forward with the case intact.

Diallo plans to attend the meeting Monday with Thompson.

"This is the first time we've received a letter rather than a phone call. What's odd is that they told her she has to be there at 3 p.m. (and) that the meeting can't be rescheduled. It's like ... treatment of a criminal defendant, not a victim," Thompson told CNN.

Strauss-Kahn was indicted on charges that he sexually assaulted Diallo in his luxury New York City hotel suite in May. His attorneys insist any sexual encounter was consensual. Strauss-Kahn has pleaded not guilty to the charges.

On July 1, a judge freed Strauss-Kahn from house arrest after prosecutors told the court that Diallo admitted she had lied about the specifics of her whereabouts after the incident and, in the past, in the details of an asylum application and information on tax forms. Prosecutors said she admitted lying on the asylum application about having been a victim of a gang rape, even providing details of an attack -- and later admitting it never happened.

Diallo and her attorneys have said she was attacked by Strauss-Kahn, and that her case should go to trial.

"If the D.A. who we put into office to protect our mothers, our sisters, our daughters, our wives will not stand up for them if they are raped or sexually assaulted, then who will?" Thompson said Sunday.

"There is overwhelming evidence to support that a sex assault occurred," Thompson added, adding that a grand jury had handed down an indictment in the case.

"If the grand jury didn't believe they had sufficient evidence, they would never have indicted Strauss-Kahn."

Diallo has filed a civil lawsuit against Strauss-Kahn. She has not named a specific dollar amount she is seeking.

After Diallo took her case public, bringing her accusations to the media, Strauss-Kahn's attorneys William Taylor and Benjamin Brafman put out a statement saying, "Ms. Diallo is the first accuser in history to conduct a media campaign to persuade a prosecutor to pursue charges ... against a person from whom she wants money."

Thompson said his partner, Wigdor, will hold a news conference Tuesday in Paris to respond to the outcome of the status hearing in the case.