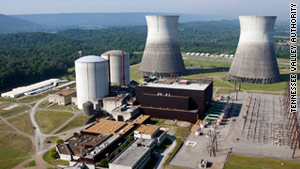 The Tennessee Valley Authority has approved completion of a nuclear unit at the Bellefonte site near Scottsboro, Alabama.
STORY HIGHLIGHTS
RELATED TOPICS

(CNN) -- The Tennessee Valley Authority has approved construction on a nuclear plant in northeastern Alabama -- the first U.S. agency to do so since the Japan nuclear disaster this year.

The TVA board of directors -- which approved the $4.9 billion project Thursday night -- said the Bellefonte project could create 2,800 construction jobs in north Alabama as well as 650 permanent jobs once the plant is complete.

Construction won't begin until after 2013, and it will be another seven years, at least, until the plant is online, TVA said. They say it will provide enough megawatts to power about 750,000 homes in the region.

The TVA still needs approval from the Nuclear Regulatory Commission before it can start construction at Bellefonte, a commission spokesman said.

"TVA still has work to prove they're in a position to start construction," commission spokesman Scott Burnell said. "But TVA's decision yesterday marks their formal re-entry into the process of completing the plant and bringing it online."

It could take months before the agency grants a full construction permit to the TVA.

The triple meltdown at Japan's Fukushima Daiichi power plant after the March 11 earthquake and tsunami was the worst nuclear accident in a quarter-century. It displaced more than 100,000 nearby residents, and engineers are still working to restore normal cooling in the three reactors that melted down.

The NRC has made "recommendations" for nuclear plant operators in light of Fukushima, but it has not yet made any "new or enhanced requirements," Burnell said.

Nevertheless, TVA said it is taking into account the "lessons learned" from the Japan nuclear disaster.

"As we build Bellefonte we will integrate safety modifications from the extensive review of the lessons learned from the Fukushima nuclear plants in Japan," Tom Kilgore, TVA president and CEO, said in a statement.

Construction on the Bellefonte nuclear site began more than 37 years ago, and the facility is already 55 percent complete. It's near Scottsboro, Alabama, about 40 miles east of Huntsville.

Construction at Bellefonte was halted in 1988 because, according to the TVA, there wasn't a need for the increase in power at the time.

"Now because demand continues to grow, they (the TVA board members) are looking at other options and Bellefonte is one of them," TVA spokeswoman Barbara Martocci said.

CNN affiliate WAAY-TV in Huntsville reports that local business owners are excited that the new nuclear plant could help boost their sales.

"Well, I hope it will increase it about 25 percent," restaurant owner Miles Smith told WAAY. "That will be a big, big impact; it really will."

The project also has its opponents. The Southern Alliance for Clean Energy warns that not only is there "compromised radiation containment in the unfinished reactor" at Bellefonte, but it would be a "financial gamble" to get any of the Bellefonte reactors back online.

"The Southern Alliance for Clean Energy has serious concerns about TVA's push to complete the mothballed, abandoned Bellefonte reactors," Steven Smith, the group's executive director, said in a statement.

The NRC said the TVA has a lot of work to do before it can start new construction at Bellefonte.

"TVA is still in the information-gathering and information-providing phase prior to the NRC granting full authorization to grant construction," Burnell said.

The TVA board also approved a 2 percent rate increase starting on October 1 to pay for "nuclear safety modifications as a result of Fukushima" as well as cybersecurity measures and clean-air initiatives, it said.

The nearly 9 million customers indirectly serviced by the TVA will pay an average of $1.60 more a month on each 1,000 kilowatt-hour bill, the TVA said.

The price hike will not directly fund the Bellefonte project, according to Martocci.

She said the board is looking at paying for the project through "alternative financing" as well as borrowing through bonds.

"We'll look at that, and certainly anything we do comes from the revenue we get from the sale of electricity. We don't get any money from the federal government," Martocci said. "What we're trying to do is reduce the cost to our consumer as much as possible."