Changing the world through art 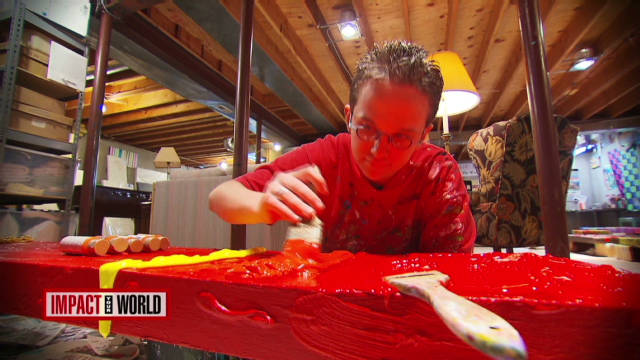 (CNN) -- At 12 years old, Jeff Hanson was struggling to see the world around him.

"He was walking off curbs and falling down staircases because he couldn't see that they were there," said his dad, Hal Hanson.

Hanson had been diagnosed at an early age with neurofibromatosis, a genetic disorder that can cause learning disabilities and in his case an optic nerve tumor.

When the tumor threatened to leave him blind, he underwent rounds of chemotherapy and 28 days of radiation.

"We talked to Jeff about it, and we made light of it. We didn't want it to scare him or make him feel threatened," his dad said.

To lift his spirits, he started painting watercolors on note cards.

"It was sad to see this 12-year-old child go through treatment," said his mom, Julie Hanson. "So one day we just took out the watercolors and note cards and Jeff started painting ... and that's when we recognized as parents that Jeff had a great gift for color."

"It helped me a lot painting during chemotherapy and radiation because it was something to do. It was fun," Hanson said.

That summer, Hanson started selling his note cards along with his mom's baked goods at the foot of their driveway in Overland Park, Kansas.

"In the beginning, it was a lemonade stand. And he thought he'd make a few dollars and have some spending money," his father said. "But what we quickly realized was that he was making a lot of money."

He donated the money to the Children's Tumor Foundation to help research his diagnosis.

"It makes me feel really good that I was able to give it away and help others," he said.

For Hanson, it was just the beginning.

He went from painting watercolors on note cards to creating colorful acrylic art on canvases.

Then he started auctioning his paintings at charity events.

In five years, Hanson has donated more than $350,000 from the sale of his paintings to more than 50 charities, most of them devoted to children's health.

At a recent event for the Make-A-Wish Foundation, Hanson sold one of his paintings for $15,000 during the live auction. The second bidder offered to pay another $15,000 if Hanson painted a second piece.

"In just minutes, Jeff raised $30,000," his mom said. "He loves to chuckle and say the only thing that sold for more was a Corvette."

At 17, the sight-impaired teen doesn't plan to slow down any time soon.

"My goal for the future is to raise a million dollars for charity," he said.

"He's a young businessman trying to take his gift and use his paintings to invest in his visually impaired future," his mom said. "At the same time, the philanthropic side of his business is exploding."

Hanson's art is on display at the Aloft Hotel in Kansas. Even some celebrities like Elton John and Billy Joel own his paintings.

"I love the way Jeff's paintings make me feel and the use of his bold colors and his texture," said Rachelle Craig, an art collector who owns one of his paintings. "For this young person to be able to do what he has done, it's an incredible story. His story is the true art."

"Everyone who hears his story and who sees his work finds their own hearts changed," said Adam Hamilton, senior pastor for the United Methodist Church of the Resurrection in Leawood, Kansas.

To learn more about Hanson and his art, visit his website at JeffreyOwenHanson.com.