The epidemic of college football scandals

By Terence Moore, Special to CNN 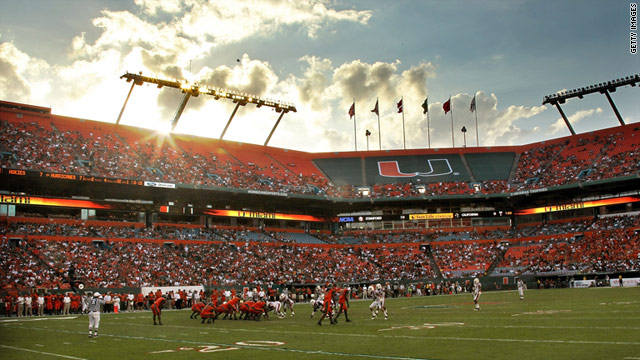 A former booster says for eight years he showered dozens of Miami players with cash and gifts and also supplied prostitutes.
STORY HIGHLIGHTS

Editor's note: Terence Moore is a CNN contributor and a sports columnist of more than three decades. He has worked for the Cincinnati Enquirer, the San Francisco Examiner, the Atlanta Journal-Constitution and AOL Sports. He's on Twitter @TMooreSports.

(CNN) -- For a while, it happened only every few years or so. Now, there rarely is a month, week or day that passes without a big-time program in college football sprinting deep into scandal while daring the National Collegiate Athletic Association (NCAA) to tackle it.

The University of Miami is just the latest team on the verge of drawing penalty flags from NCAA officials for unnecessary silliness. In fact, the Hurricanes could draw the ultimate penalty in college football, called the death penalty. The NCAA only considers giving such a penalty to a university facing a second major violation within five years or dealing with a particularly outrageous situation.

SI: Why NCAA wouldn't give Miami the death penalty

That was the case for Southern Methodist University, whose football program was banned for two seasons during the 1980s. No other program ever has received the death penalty, but there is rampant speculation that Miami could be the second.

The Hurricanes reportedly had dozens of past and former players spend a stretch from 2002 to 2010 receiving illegal gifts and other things from Nevin Shapiro, a convicted Ponzi schemer and Miami booster. Yahoo Sports broke the story after 100 hours of jailhouse interviews with Shapiro, who pleaded guilty to robbing investors of around $83 million in his Ponzi scheme of $930 million.

Yahoo Sports also reported that several Miami coaches and administrators tried to cover up the matter. Among other revelations, Shapiro told the website that he spent "millions" on Miami players, ranging from sex parties on his yacht to expensive jewelry to an abortion for a woman impregnated by a Hurricane player.

The Miami situation is so egregious that NCAA president Mark Emmert issued the following statement: "If the assertions are true, the conduct at the University of Miami is an illustration of the need for serious and fundamental change in many critical aspects of college sports."

If this sounds familiar, it should. Along the Hurricanes' way to five national championships from 1983 through 2001, they flaunted their bad-boy image while ducking in and out of the NCAA slammer for rules violations. The Miami program crumbled after that.

SI: The NCAA system is broken; here's how to fix it

Then, to hear these reports tell it, the Hurricanes tried to revive their glory days through shortcuts.

They aren't alone with those shortcuts.

Ohio State. Southern Cal. Auburn. North Carolina. Oregon. Tennessee. LSU. Those are just some of the other big-time college football programs in the news for stuff other than blocking and tackling. They've been mentioned more regarding cheating and scheming.

Just take it from Kirk Herbstreit, the award-winning college football analyst for ESPN, who told CNN.com, "I honestly don't think the sport has ever had as tumultuous of an off-season as we had during this year. I do mean, EVER, and I'm referring to the entire history of the sport."

Through it all, with NCAA enforcement people looking more powerless than Barney Fife from those old Andy Griffith sitcoms, there have been sordid tales involving automobiles, houses and even prostitutes. There have been recruiting violations -- gigantic ones -- of all shapes, sizes and situations. There have been cover-ups and alleged cover-ups, ranging from coaching staffs to the highest levels of universities.

Mostly, there has been no reason to believe things will improve in big-time college football before the end of the millennium.

"I just think the leadership groups -- including coaches, people who care about the sport at the end of the day -- have got to come up with some ideas and brainstorming ways on how to police this," said Herbstreit, a former quarterback at Ohio State, where its last quarterback, Terrelle Pryor, was among those who helped place the school under its current NCAA investigation for a slew of things.

The thing is, even though Ohio State volunteered to "vacate" its 12 victories last season while submitting to a two-year probation -- in addition to whatever else the NCAA may impose this fall -- the Buckeyes remain a powerhouse in the Big Ten. They also continue to rank among the top recruiters in college football. They have little to no incentive not to thumb their noses again at the NCAA cops.

Coaches, people who care about the sport at the end of the day have got to come up with some ideas and brainstorming ways on how to police this.
--Kirk Herbstreit, ESPN College Football Analyst

Added Herbstreit, "That's why we have to figure out how to try to get college football back to people in charge who generally care about the health of the game and not just about churning kids out to get them ready for the NFL. That's not what college football is all about."

As for reality, when it comes to the big boys, college football really is about teams acquiring as many NFL-caliber players as possible to help them with the bottom line -- winning.

Winning big by any means necessary.

Which raises a question: For the sake of that bottom line, are more than a few college football programs (and their conferences, for that matter) deciding to suffer the consequences of cheating on purpose these days? After all, winning means money, and the money associated with teams and conferences winning consistently in the NCAA's so-called Football Bowl Subdivision (formerly known as Division 1-A) is huge.

The SEC is in the midst of a $2.2 billion contract with ESPN. During the last two seasons of the Big Ten Network, each conference school received slightly more than $6 million. The University of Texas is joining Notre Dame with its own television network, and the payouts for both contracts could slice chunks from the national debt.

If you combine those TV examples with the NCAA setting another record for football attendance last year, the money/incentive for the big boys to continue as bad boys regarding NCAA rules is outrageous.

According to the SportsBusiness Journal, the Bowl Championship Series (BCS) distributed more than $174 million earlier this year to teams that played in its five bowls. The Journal also said the payout was a 22 percent increase over last year's total, and consider this: The conferences receiving the most money -- $27.2 million each, for having two teams apiece in BCS games -- were the Big Ten, Pac-10 and Southeastern Conference (SEC).

SI: This is more than a Miami problem

Some of the biggest scandals of the last few months have involved teams from those conferences.

There is Auburn, for instance, and the Tigers are the latest in a string of five consecutive teams from the SEC to win the national championship. They did so with Heisman-winning quarterback Cam Newton spending his one year at Auburn battling opponents and reports that his father sought as much as $180,000 from schools for rights to his son. The NCAA allowed Newton to continue to play, but they say the investigation isn't closed.

So did Auburn know about Newton's issues, ignore them and use his considerable talents for the sake of now instead of the future? Only Auburn officials know, but this is for sure: Members of the Tiger Nation always can say their folks whipped Oregon on the field last season for its first national championship since 1957.

You know, that bottom line.