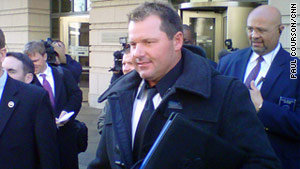 Washington (CNN) -- A half-dozen contract security officers at the federal courthouse where baseball's Roger Clemens was put on trial last month are in trouble with their employer for accepting gifts from Clemens' defense team after the judge declared a mistrial, the U.S. Marshals Service said Thursday.

Clemens, under a six-count indictment accusing him of lying to Congress during an investigation of illicit steroid use, may still face a re-trial on those charges. He has pleaded not guilty.

U.S. District judge Reggie Walton had declared a mistrial soon after the jury had been seated, when prosecutors introduced testimony he previously ruled inadmissible.

After the mistrial, according to the Marshals Service, a number of courthouse security officers employed by a contractor received baseballs autographed by Clemens, reportedly in appreciation of their escorting him through a large mob of media covering the trial. The security company confirmed the gifts, the Marshals Service said.

"These alleged violations did not jeopardize judicial security," the Marshals Service said, leaving any discipline up to the contractor that is conducting it own investigation.

While no laws were broken, "It is a violation of the contract for Court Security Officers to accept gifts in connection with official duties," according to a policy cited by the Marshals Service. At risk could be a $5 million security contract for the company in place since 2008.

In the statement sent to CNN Thursday, the Marshals Service said "six employees have been identified as being involved in the incident." The service said the security company has proposed disciplinary actions, "and those recommendations are being reviewed by the Marshals Service." The statement did not elaborate on the proposed disciplinary actions.

Meantime, the guards remain scheduled for duty, the statement said.