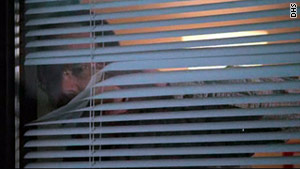 Homeland Security's new ad campaign slogan is, "If you see something, say something."
STORY HIGHLIGHTS

Washington (CNN) -- Homeland Security Secretary Janet Napolitano unveiled new television ads Wednesday for the public awareness campaign "If you see something, say something," as the 10th anniversary of the September 11, 2001, attacks nears.

"Today, we are stronger than we were on 9/11," Napolitano said, but added, "There are no guarantees in this world."

Video of the new television ads was played during Napolitano's remarks at the U.S. Chamber of Commerce. One of them is set in a public transit station, where pedestrians watch as someone pulls a handbag from the trunk of a car and leaves it on a bench in the waiting area.

With dramatic, unsettling music in the background, the announcer intones, "It's nothing, you think. Can you be sure?"

Napolitano said the videos are not intended to be alarmist, nor do they suggest only a vague threat, as did the security alert "color code" of years past.

"We want the public to live with information, but not to live in fear," Napolitano said in response to a reporter's question. "When they have information, that helps reduce the level of fear."

"'See something, say something' is the same thing," she said of the campaign, which was officially launched in February. It's "what we would call situational awareness" by the public.

The phrase "If you see something, say something" was originally coined and trademarked by New York City's Metropolitan Transportation Authority in 2002. According to the MTA website, the agency has since licensed the tagline to "54 domestic and international transportation providers and government agencies for use in their own anti-terrorism campaigns."

Also attending Wednesday's gathering at the U.S. Chamber of Commerce was former DHS Secretary Tom Ridge, who was critical of the slow pace and sometimes incomplete manner in which security concerns first identified in the wake of the 9/11 attacks were addressed.

"We are safer, we are more secure, but the threat remains," Ridge said.

He cited dramatic improvement in the documentation of people granted visas to enter the United States. But he said there is no matching level of documentation for when and if those people leave the country.

"I can't tell you today how many have overstayed their visa, 'cause we never invented the exit system," Ridge said, his voice rising.

"You can imagine, several million visitors over the past couple of years, do you think anybody's overstayed their visa?" Ridge asked. "Do you know where they are? Do you know what they're doing?"

"As good as (the Department of) Homeland Security has become, and as strong as it's become, it's not perfect; no institution of government is perfect. It is a consumer of information, and it can only act on information given to it."

On another priority that was supposed to be fixed by now, Ridge said he is agitated that, 10 years later, communications problems remain among emergency responders across the country. "We have the capacity, we have the technology. What we don't have is the political courage and the focus to try to help these men and women, who we celebrate with speeches," he said.

"If we're really that concerned," Ridge continued, the nation should "finally build a platform, a foundation, so that these men and women have that interoperable communications system."

Ridge also said it's time to discontinue using the words "war on terror." He said "it's really a war against a belief system, isn't it, and the ideology of hatred, and evil ideology?"

"As long as it has appeal to even the smallest number of individuals, within the broader Muslim community of a billion-plus, the global scourge of terrorism will be with us."

Despite that forecast, Ridge praised Napolitano's public awareness campaign as a "gentle reminder."

"Just be alert, be aware; if you see something, say something. I think it's a very good admonition, a very good charge for the American citizen."