Sharples, West Virginia (CNN) -- Charles Bella is a retired coal miner who now opposes the type of mining he used to do: mountaintop removal.

"I believe that if they stop mountaintop removal now, it might be too late, but it would help. So much of southern West Virginia is already destroyed," Bella said.

A new poll shows Bella is not alone in his opinion.

Fifty-seven percent of respondents in a CNN/ORC survey released Thursday say they oppose the controversial mining process, in which a mountain is blasted apart and the debris deposited in nearby valleys. The coal is then dug out, and miners work to rebuild the slopes. About one-third of West Virginia's coal is mined this way.

"They are probably not miners," Diann Kish said of the poll respondents. A neighbor of Bella's and the wife of a retired miner, she supports the process.

Thirty-six percent agree with Kish, according to the poll. Seven percent didn't have an opinion. 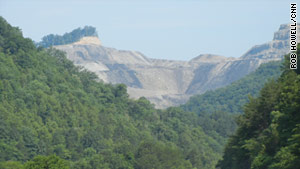 About one-third of West Virginia's coal is mined from mountaintop sites like this one.

"Coal -- let me tell you, this fed our families," she said holding a baseball-sized chunk of the black mineral in her hand.

"Doesn't bother me what other people think," Kish said. "It's not their livelihood."

While the work has provided for families, it's not without its drawbacks. Recent studies by West Virginia University associate professor Michael Hendryx find "multiple illnesses" in mining areas. "Higher rates of cancer is one of them. Higher forms of chronic heart disease, heart attacks, and lung disease like (chronic obstructive pulmonary disease), kidney disease," Hendryx said. "We have found evidence for all of those."

"I think it really is the biggest public health problem that West Virginia faces," he added.

Bill Raney, president of the West Virginia Coal Association and a lobbyist for the coal industry, takes issue with Hendryx's findings. "I think what you find is there is a correlation as opposed to a causation and it's got to be analyzed," he said. He believes Hendryx's studies raise more questions than answers.

Raney questions the validity of the CNN/ORC poll, too. "I think you have to spend some time explaining that mountaintop mining is authorized by federal law, has been for years," he said.

The CNN poll was conducted by ORC International from July 18 to 20, with 1,009 adult Americans questioned by telephone. The poll's overall sampling error is plus or minus three percentage points.