Kansas boy wants the world to recognize his fallen father 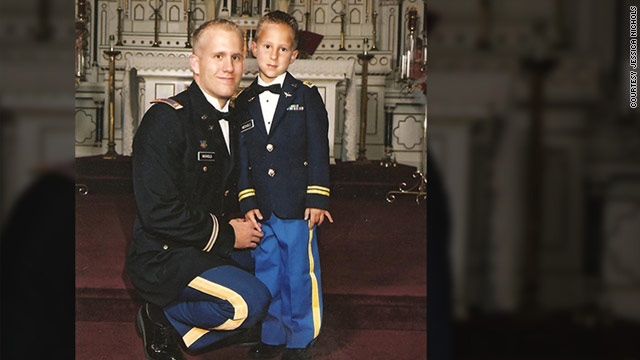 Bryan Nichols poses with his son Braydon in this photo provided by Braydon's mother.
STORY HIGHLIGHTS

(CNN) -- A young boy in Kansas was among millions in America who watched the horrifying news this past weekend about the Chinook that went down in Afghanistan's Wardak province.

That boy in Kansas soon found out that his father, a U.S. Army pilot, was aboard the doomed helicopter.

In the midst of his world shattering, he could not understand why the Navy SEALs drew so much attention. There were 30 Americans on board that Chinook. Why wasn't anyone mentioning his father, a chief warrant officer with Bravo Company, 7th Battalion, 155th Aviation Regiment?

So he sent in a photograph to CNN's iReport of his dad, Bryan Nichols, sitting with four of his Army buddies in front of a military aircraft.

"My father was one of the 30 US Soldiers killed in Afghanistan yesterday with the Seals rescue mission," he wrote. "My father was the pilot of the chinook. I have seen other pictures of victims from this deadly mission and wish you would include a picture of my father. He is the farthest to the left."

He signed his name, Braydon Nichols, said he was from Kansas City and that he was 10 years old.

Reaction to deaths of SEALs

Bryan Nichols' aunt Sue Keller of Palco, Kansas, said Monday that Braydon, Nichols' only son, was stung by the way the news of the deadly Afghan incident played out on the airwaves.

The iReport post was the only consolation, perhaps, for a boy who was counting the days before his father came home.

There were just nine left before Bryan Nichols, 31, was to fly home to Kansas City for a two-week leave.

Nine days and he would have been back on a motorcycle. Nine days and Braydon might have watched a baseball game again with his dad. Or shared his excitement about starting fifth grade.

Bryan Nichols and Braydon's mother were divorced but father and son were close, Keller said. When Nichols remarried, he had a little Army uniform made for Braydon to wear at the wedding.

Like father, like son. The two had stayed in touch via Skype since April, when Nichols was deployed. Brayden missed his dad terribly, Keller said.

A reunion will never take place after the deadliest day for Americans in the nearly decade-long Afghan war.

Keller said Nichols parents and his wife were at Dover Air Force Base to collect the remains Tuesday.

After the funerals, this weekend's tragedy will begin to fade from American consciousness. But not for a little boy in Kansas who will grow to manhood without his dad.