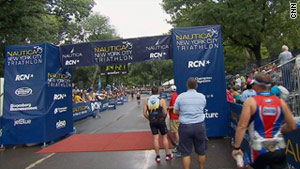 The Nautica New York City Triathlon is an Olympic distance race, consisting of a swim, a bike ride and a run.
STORY HIGHLIGHTS
RELATED TOPICS

(CNN) -- An Illinois woman died Monday after participating in New York City's Nautica Triathlon on Sunday, the second athlete to do so.

Amy Martich died at St. Luke's Roosevelt Hospital Center in New York City -- a day after a man died after participating in the swim portion of the triathlon, according to hospital spokeswomen Elizabeth Dowling and Terry Cavanaugh.

Bill Burke, director for the triathlon, told CNN he was "deeply saddened" by the participants' deaths.

Martich, of Elmhurst, Illinois, was rescued halfway through the swim portion of the triathlon and transported to 79th Street's Dock A, where she was treated by on-site emergency medical staff, Burke said.

Kudryk was two-thirds of the way through the swim portion of the triathlon when a CNN employee, also competing, noticed a man floating on his back with his head beneath the water.

"It didn't look like he was breathing, his lips were blue," remembered Jeff Kepnes, supervising producer for CNN Special Events.

Shortly after, Kepnes says he struggled to help lift Kudryk's body onto a rescue sled along with another rescuer.

"We tried to maneuver him," Kepnes said. "He was heavy, he wasn't moving. We were being weighed down."

This is the third triathlon for Kepnes, who said the water was the choppiest he's ever seen it on Sunday.

"I did notice that there were more people going into safety stroke. There were more conversations with rescue in the kayaks and Jet Skis," Kepnes said.

Kudryk was driven to one of four New York City Fire Department boats stationed in the river, where he was treated by paramedics on board before being taken to the emergency medical station on Dock A, Burke said.

Both Martich and Kudryk were transferred to St. Luke's Roosevelt Hospital Center just after 8 a.m. on Sunday, Burke said. Kudryk died shortly after arriving at the emergency room, Cavanaugh said.

The Nautical New York City Triathlon is an Olympic distance race, consisting of a 1,500-meter swim, a 40-kilometer bike ride and a 10-kilometer run, according to the event's website.

Burke said the swim portion of the triathlon, which took place in the Hudson River Sunday, was staffed with "32 lifeguards, 53 kayakers patrolling the water, three launch boats, two Jet Skis with sleds" and three NYPD boats equipped with divers and paramedics.

Burke said he initially delayed the race by several minutes due to inclement weather.

"I was watching a line of thunderstorms come toward the course, I was waiting to see if it was going to materialize and if we would have a lightning problem," he said.

In addition, Burke said an accident on the Hudson Parkway, which caused a downhill portion of the bike path to be slicked by oil and gasoline, pushed the race's starting time back by about 40 minutes.

Manhattan Borough president Scott Stringer sent a letter to Burke Monday requesting a "top to bottom review of the safety protocol for the triathlon," he told CNN.

"New Yorkers signed up for a triathlon -- not a game of Russian Roulette," Stringer said in a press release Monday.

CNN's Kristina Sgueglia and Kristen Hamill contributed to this report.