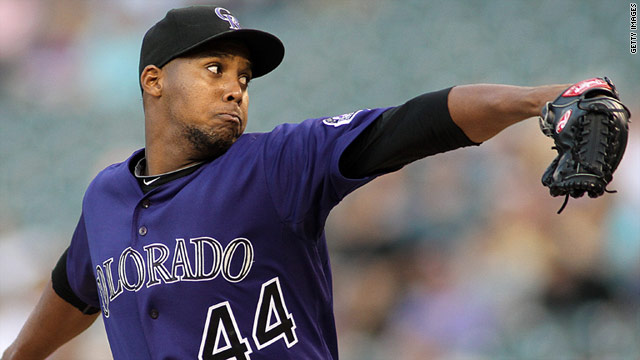 Juan Nicasio was "resting comfortably" at a Denver hospital following surgery, the Colorado Rockies said in a statement.
STORY HIGHLIGHTS

(CNN) -- Colorado Rockies pitcher Juan Nicasio had surgery Saturday after he was struck by a line drive and suffered a neck fracture, according to the team.

Nicasio, injured in a frightening moment Friday night at Coors Field, was "resting comfortably" at a Denver hospital following surgery to stabilize a fracture to the C-1 vertebra in his neck, the Rockies said in a statement.

The right-handed pitcher fell to the mound in the second inning after a ball hit by Ian Desmond of the Washington Nationals struck the right side of his head and went into foul territory.

The team's staff assisted Nicasio for several minutes before he was taken off the field by a cart. He will remain hospitalized as he recovers, the Rockies said.

Nicasio, 24, a native of the Dominican Republic, is 4-4 in his rookie season. He was placed on the 15-day disabled list Saturday, but it was not certain when he will be able to return.