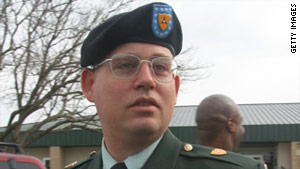 Graner, 42, will be dishonorably discharged and on supervised release until December 2014.
STORY HIGHLIGHTS

(CNN) -- A former guard termed a ringleader in the physical abuse and sexual humiliation of Iraqi prisoners at the Abu Ghraib prison in Iraq was released from prison Saturday.

Graner, from Uniontown, Pennsylvania, was credited with good conduct.

He served his prison term as a private, with no salary, and was to be dishonorably discharged after release.

He was convicted in January 2005 of indecent acts, dereliction of duty, conspiracy to commit maltreatment and assault consummated by battery.

Photos of U.S. military personnel abusing naked and restrained prisoners in the facility outside Baghdad shocked the world when the scandal broke in early 2004.

Graner, a member of the 372nd Military Police Company, was convicted of photographing a detainee being dragged by another guard, Pfc. Lynndie England, by a leash wrapped around the prisoner's neck, and posing for a photograph with Spc. Sabrina Harman behind a pyramid of naked prisoners.

One count of dereliction of duty accused him of "failing to protect prisoners from abuse, cruelty and maltreatment."

Graner, 42, who participated in correctional and vocation programs while incarcerated, will be on supervised release until December 2014, Steed told CNN.

During the penalty phase of his court-martial, Graner said he did not relish doling out what he described as "irregular treatment."

During the court-martial, the defense contended military police were following orders to "soften up" prisoners for interrogation.

Prosecutors showed video and photographs to the jury.

"What we have here is plain abuse, no doubt about it. There is no justification," prosecuting attorney Capt. Chris Graveline said.