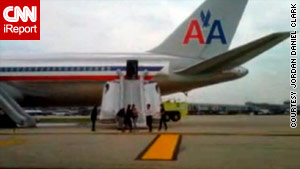 Jordan Daniel Clark says he was traveling as part of a school group when his plane had "a rough landing."
STORY HIGHLIGHTS

The incident occurred about 2 p.m. on American Airlines Flight 41, which was flying in from Paris, FAA spokesman Tony Molinaro said. The pilot reported that some tires caught fire upon landing, Molinaro said.

American Airlines spokesman Ed Martelle said the plane's crew reported a fire on brake No. 7 of the aircraft, a Boeing 767-300, and the smell of a hot brake entered the ventilation system.

The plane was carrying 220 passengers and 12 crew members, Martelle said. They were evacuated by the emergency chutes.

One flight attendant reported being scratched evacuating down the chute, Martelle said. No other injuries were reported, he said.

He described the incident as a routine landing where a braking incident occurred. It was not an emergency landing, he said.