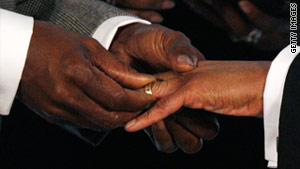 (CNN) -- The American Psychological Association is calling on state and federal officials to stop anti-gay legal measures and to legalize same-sex marriage.

The scientific and professional organization's guiding body voted unanimously at its annual meeting this week in Washington to declare its support for "full marriage equality for same-sex couples."

The resolution "clarifies the Association's support for same-sex marriage" in light of new research, the group said. A similar resolution in 2004 opposed discrimination against same-sex relationships, but refrained from a more formal policy recommendation.

Dr. Clinton Anderson, APA associate executive director, said that the timing of the resolution is an indirect result of several states' legalization of marriage.

"We knew that marriage benefits heterosexual people in very significant ways, but we didn't know if that would be true for same-sex couples," said Anderson, who is also director of the APA's Office on Lesbian, Gay, Bisexual and Transgender Concerns.

Now that six U.S. states permit same-sex marriage, researchers have been able to conduct studies with those couples.

The research, Anderson said, indicates that marriage "does confer the same sense of security, support, and validation" to same-sex couples as to heterosexual ones.

The resolution also points to evidence that ongoing political debate about marriage creates stress for gay men and lesbians and perpetuates stigmas and prejudice about their communities. This stress can make people physically and psychologically sick, the APA says, calling the link between stress and illness "well established."

Maggie Gallagher, chairman of the board of the National Organization for Marriage, takes issue with the assertion that legalizing same-sex marriage would improve community acceptance of homosexuality.

"There is no evidence that gay teens are better off in Massachusetts, a state that has gay marriage, than they are in Wisconsin, a state which has passed a marriage amendment defining marriage as one man and one woman," she said in an e-mail response to CNN.

Gallagher continued, "The release of this statement is unfortunately going to undermine confidence in APA statements generally, I would predict."

Both the National Organization for Marriage and the APA are skeptical of one solution to the gay-marriage debate: civil unions. Rhode Island NOM executive director Chris Plante is quoted in a press release on the NOM website calling the move "nothing more than a Trojan Horse that will usher in same-sex marriage sooner rather than later." Elsewhere on its website, NOM calls for dealing with legal and economic benefits separately from any discussion of marriage or unions.

The APA also feels that civil unions miss the mark.

"Anything other than marriage is, in essence, a stigmatization of same-sex couples. Stigma does have negative impacts on people," Anderson said.

"That's the analysis that we've come to and why we've decided to support full marriage equality -- because domestic partnership or civil union will still convey the message that same-sex couples are not as good."